Australia are ranked 5 on the ICC Test rankings but according to former captain Ricky Ponting, they are the second-best team in the world behind India.

Australia are ranked 5 on the ICC Test rankings but according to former captain Ricky Ponting, they are the second-best team in the world behind India. In the last one year, Australia have lost just two Tests and have been on a rampage at home, inflicting whitewashes over Sri Lanka and Pakistan.

Currently playing New Zealand in a three-Test series, Australia are on the verge of making another sweep leading as they already lead the series 2-0 and have pushed the Kiwis on the backfoot in the third Test in Sydney. Ponting claimed that on current form New Zealand are no match to Australia and reckoned England, who drew 2-2 in the Ashes last year, are struggling.

“I think Australia, on what they’ve done over a long period of time, although they’re officially ranked fifth, they’re the second-best team in the world,” Ponting told cricket.com.au.

“India are still the best team in the world currently, Australia are second, England are struggling. England are higher than they should be. They’re fourth on the list, they can go down.

“New Zealand can go down a spot on the back on this series because they’ve just been comprehensively outplayed. It’s not like they’ve really even competed to be honest. Perth was very bad (loss by 296 runs), Melbourne was even worse (loss by 247 runs) and Australia bat first here and get 454. If you’re to compare those two teams, there’s no comparison between Australia and New Zealand.”

Australia lead New Zealand by 243 runs at stumps on Day 3 of the Sydney Test, having dismissed the Kiwis for 251 after Nathan Lyon snared five. Notwithstanding New Zealand’s impressive streak on having not tasted defeat in seven consecutive Test series, Ponting is not convinced that their batsmen Tom Latham and Henry Nicholls are currently two of the Top 10-ranked batsmen in the world in Test cricket.

“You couldn’t begrudge New Zealand’s ranking coming here. They hadn’t lost a series in seven series, so that’s a good achievement. I was worried about some of their individual player rankings,” said Ponting.

“Tom Latham and Henry Nicholls being rated in the top 10 batsmen in the world, they’re not, it’s as simple as that. Latham’s overall average is 42 and Nicholls’ is 40 and they find themselves in the top 10 in the world that doesn’t make much sense to me. “That’s not good enough to be known as a top 10 batsman in the world. I think what Australia have done over the past 12 months they’re trending to pretty soon be pushing for the best team in the world again.” 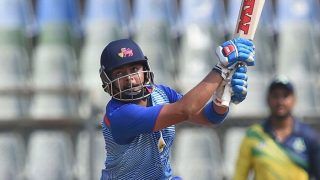