Former captain Sourav Ganguly feels India's humiliating 0-4 whitewash in the Test series against Australia has proved to be a "nightmare" for Duncan Fletcher and his reputation as a coach is at stake. 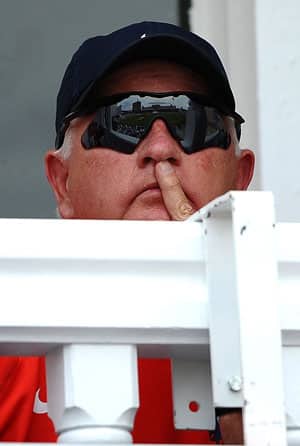 Former captain Sourav Ganguly feels India’s humiliating 0-4 whitewash in the Test series against Australia has proved to be a “nightmare” for Duncan Fletcher and his reputation as a coach is at stake.

“It must also be a nightmare for Duncan Fletcher. He has lost 11 of his past 12 matches Down Under and there must be serious pressure on him and his reputation as coach,” Ganguly wrote in his column for the ‘Sydney Morning Herald’.

“He had been widely respected as a coach by the English players and did have some success, but, at the moment, he must be wondering what he can do right.”

The former skipper said the selectors should go back to the drawing board and analyse, plan and focus on creating a strong team that delivers abroad.

“The time has come for Indian cricket to take stock of the situation. The losses in England and Australia have been big ones and we need a solution. A good strong Indian side is very important for world cricket and the way ahead must be based on proper analysis and sensible planning,” he wrote.

“Indian cricket should and will be judged on the basis of how it performs overseas and the biggest focus should be on creating a team that delivers abroad.

“India as a team will never have problems at home, no matter who the players are and who the captain is. Respect is earned when a team does well in conditions away from home – that should be the focus,” he said.

India’s abject surrender also led to speculations that senior players such as Rahul Dravid and VVS Laxman will retire after the series and Ganguly said Team India should make sure that such things doesn’t affect their future commitments.

“There have been rumours in the media that Rahul Dravid will announce his retirement. There will be sources quoted rightly or wrongly that will make headlines. When one doesn’t do well, speculation starts, judgements are passed, people come to their own conclusions,” he wrote.

“It’s important to let the series soak in, not let it affect the upcoming commitments too much but at the same time take proper notice of the situation and deal with it.”

The 39-year-old also said that selectors should respect the senior players and allow them to take a call on their retirement.

“There is much speculation and talk about the seniors, how certain players ]will lose their place and how it is time to get youth into the team. The noises have become very loud with Virat Kohli playing well in the last two Tests and making a strong claim for the youth fraternity,” he wrote.

“One must remember that every good team is about the right mixture of youth and experience, with good heads to take them around. The greats in the team are close to 40, but the cricket fraternity must show respect to them.

“I don’t disagree that performance is the sole criteria in picking teams, and the seniors need to be handled well.

They are mature enough to know what is right for the team as they have made huge contributions to the success of the game in our part of the world, and I firmly believe they should be allowed to decide when they should go,” he added.(PTI)

BCCI not in hurry to discuss India's abysmal performance Down Under

Mumbai in command against Maharashtra in Cooch Behar Trophy