Aaron Finch’s 89 from 52 balls boosted Australia’s score to 201 for seven against India in the only Twenty20 International at Rajkot on Thursday.

India won by 6 wkts
Man of the Match: Yuvraj Singh 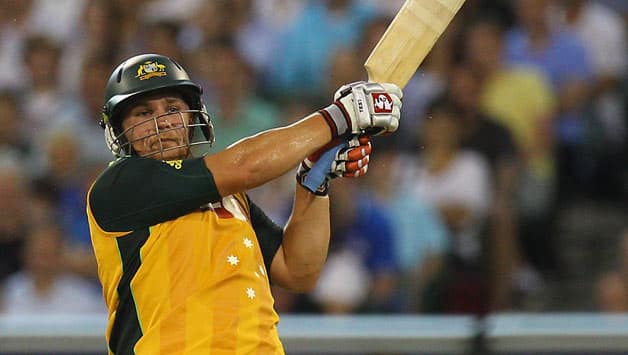 Aaron Finch’s 89 from 52 balls boosted Australia’s score to 201 for seven against India in the only Twenty20 International at Rajkot on Thursday.

On a flat deck at the Lord’s look-alike new stadium, the team batting second was very well planned to chase a gigantic target. Nic Maddinson and Aaron Finch went berserk smashing the ball as if it was the only option they had to survive. Fifty was up inside five overs. And by the time powerplay overs were done it had swollen to 73 for the loss of a wicket.

Soon after the initial bashing, the bowlers did find a little trick that change of pace and accuracy were the only two things that could possibly save them. Bhuvneshwar Kumar found one with a ball pushed faster disturbing Maddinson’s stumps for 34.

The runs though continued to flow. In one bizarre moment, MS Dhoni who is usually smart behind the stumps didn’t appeal at all when he dislodged the bails while Finch stumbled inside the crease. Replays showed that the batsman’s foot was just in the air.

Finch reached his 50 in 29 deliveries involving power-packed shots. The Aussies did plot a mini-downfall for themselves in between. Watson walking in at No 3, presented an entertaining leg-before dismissal showing his surprise at the umpire in what was an easy call for the latter to raise the finger. After removing Watson, Vinay Kumar struck once again, when skipper George Bailey’s half-hearted jab landed straight into the hands of deep mid-wicket.

Despite the three quick wickets, the run-rate graph was warmed up with Glenn Maxwell’s arrival. The Aussie gave a little glimpse during the Champions League final and continued his clean hits with four colossal sixes in his innings of 13-ball 27 on Thursday. He was caught brilliantly by Ishant Sharma at the long-on off Ravindra Jadeja.

In the meanwhile, Dhoni was left with one bowler less when Ravichandran Ashwin was smashed by the batsmen conceding 41 in the two overs he bowled. When Virat Kohli was brought in it was more of a formality than expecting an effective result. Even the Delhi player was taken to task.

Throughout the match the run-rate never fell below 10 except in the last two overs when it mattered. Brad Haddin was dismissed trying to slash Bhuvneshwar Kumar.  But Finch on the other end was unstoppable.

The fall of wickets had no relation with the breezy scoring. After coming back to bowl, Ishant Sharma conceded 15. With four overs remaining, Finch, on 88, looked good for a century. That’s when Vinay Kumar poked his hand to a blazing drive from Finch. The bowler somehow held on to the catch but at the cost of some minor bruise to his webbing.

The run-rate did slow down a bit towards the end. Both Kumar’s survived the initial onslaught and maintained great accuracy towards the end. To an extent, Australia decision to blindly move ahead despite loss of wickets seemed to have worked looking at the eventual total. Vinay Kumar made good use of his change of pace to keep the lower order batsmen guessing while Bhuvneshwar depended on minor seam movement.

On any other wicket it would have been conveniently called a match-winning score, but at this wicket with a strong batting, India can still be favourites. This is Australia’s highest score against India in the shortest format of the game.