Australia captain Michael Clarke dismissed West Indies stalwart Shivnarine Chanderpaul with the last ball of the day to put his team in sight of victory in the third and final Test. 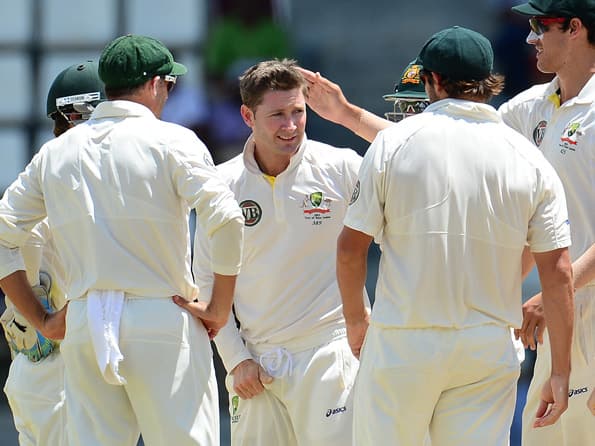 Australia captain Michael Clarke dismissed West Indies stalwart Shivnarine Chanderpaul with the last ball of the day to put his team in sight of victory in the third and final Test.

Clarke trapped Chanderpaul lbw after the 37-year-old, who had earlier become just the 10th player to make 10,000 Test runs, looked like surviving until Friday’s final day.

But his dismissal left the home side teetering on 173 for five at stumps, chasing 370 to win and level the series.

It was Clarke’s third wicket of the innings but, initially, umpire Tony Hill had turned down the appeal.

Clarke only had one review left and risked it in the hope of seeing the back of the West Indies anchorman who had faced 122 balls for his 69 – his 58th Test half-century.

Chanderpaul, playing in his 140th Test, had reached the 10,000-run landmark when he went to 14, taking his career Test average above 50 in the process.

“It felt really good to reach this milestone. I have been batting well and spending a lot of time at the crease and to reach 10,000 Test runs is something special for me,” said Chanderpaul.

“It was one of the goals I set myself and I believe I have reaped the reward for the hard work I put in over the years.”

Chanderpaul and Darren Bravo had looked comfortable earlier in the session as they built up a 110-run partnership for the fourth wicket, taking their side from a precarious 45 for three to 155 for four.

Bravo had made a patient 45 off 148 balls when he played a loose back foot drive to a Shane Watson delivery and wicket-keeper Matthew Wade dived to his left to take a neat catch.

“Shiv’s been quite brilliant. He’s certainly thwarted our bowlers. He’s shown why he’s got 10,000 runs in Test cricket,” said Arthur.

“Very uncomplicated technique even though it looks very weird on the eye. To get him right at the end of the day has just lifted our dressing room hugely.”

Bravo, too, hailed Chanderpaul as an example to other West Indies batsmen.

“Shiv is someone I enjoy batting with each and every time we have had a few partnerships, we tend to get pretty decent partnerships,” said Bravo.

“When I’m batting with Shiv he’s always there encouraging me and telling me to treat the ball on its merits and try to rotate the strike as much as possible.”

West Indies had got off to a miserable start in their second innings.

Opener Adrian Barath had not got off the mark when he clipped a Ben Hilfenhaus delivery off his legs into the air and Ed Cowan dived to his right to take a fine catch in the third over.

Kraigg Brathwaite scored the only two runs on the board before the lunch interval, ending his run of three consecutive scoreless innings.

In the 16th over, Clarke brought himself on to bowl and he had immediate success.

Brathwaite, who had moved on to 14, missed a pull shot and umpire Hill gave the lbw decision.

It was a close call and when it was reviewed by the batsman the replays showed the ball just hitting the top of the bails.

The Australian captain struck again a few overs later. Another loose shot, this time from Kieran Powell, saw the ball go between bat and pad to take out leg stump.

Powell was out for 24 and West Indies were in real trouble at 45 for three when Chanderpaul came to the crease.

Australia, who have already retained the Frank Worrell Trophy after winning the first Test and drawing the second, started the day on 200 for six and were eventually all out for 259 shortly before lunch.

Off-spinner Shane Shillingford was the star performer for the West Indies as his four-wicket haul gave him 10 victims for the match at his home Windsor Park arena.

Shillingford became the first West Indian spinner to achieve 10 wickets in a Test since Lance Gibbs in 1966. (AFP)