David Warner cracked a scintillating 163 as Australia warded off a dramatic Sri Lankan late-order fightback to snatch a thrilling 15-run victory in the first final of the tri-series. 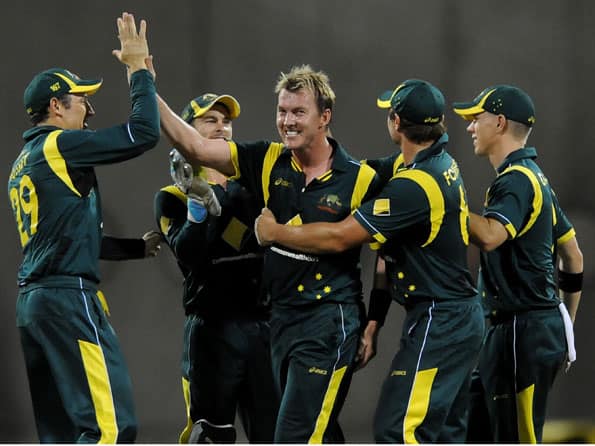 David Warner cracked a scintillating 163 as Australia warded off a dramatic Sri Lankan late-order fightback to snatch a thrilling 15-run victory in the first final of the tri-series.

After posting 321 for six, largely built around Warner’s career-best knock, the hosts got a scare with Nuwan Kulasekara (73) coming up with a blistering counter attacking innings and Sri Lankan tailenders producing some lusty hits before they fell short by 15 runs in match played under a steady drizzle.

Sri Lanka were 144 for six in the 31st over and the match seemed to be as good as over before an unexpected resistance from the lower-order batsmen nearly pulled off what could have been a thrilling victory.

The visiting side would have been in for a humiliating defeat but for the seventh wicket stand between Upul Tharanga (60) and Kulasekara (73 of 43 balls), who put on 104 runs off 70 balls, clobbering 68 in the five overs of batting powerplay between 36-40 overs.

With persistent drizzle around, the Australian bowlers were finding it difficult to grip the ball and there were a lot of full-tosses and wides bowled in the closing stages.

Brett Lee bowled the 47th over and conceded 13 runs, including a six over extra cover by Dhammika Prasad (31 not out) to bring the equation down to 23 from final three overs.

Shane Watson accounted for Rangana Herath (5) in 48th over and the Lankans needed 21 with two wickets remaining.

Lasith Malinga (1) then lofted the second ball of the final over from Watson to deep square leg to draw curtains on Sri Lanka’s heroic run chase.

Big as the Australian total was, Sri Lanka lost their top order almost without a fight under lights, losing wickets at regular intervals to the disciplined home side attack.

The islanders had begun the chase brightly enough, smashing 66 off the first eight overs before getting mired by the slower bowlers of Australia, notably left-arm spinner Xavier Doherty and part-time off-spinner David Hussey.

Lee did his part by taking care of aggressive Lankan openers Mahela Jayawardene (14) and Tillakaratne Dilshan (27) who had raised 39 off only 4.4 overs into the innings.

Jayawardene left while trying to glide Lee to third man while Dilshan was bowled trying to work a delivery down the legside.

Sri Lanka’s batting find of the tour, Dinesh Chandimal was strangely off-colour, making 14 off 27 balls with one four before cutting a David Hussey delivery to point, beaten by the extra bounce in the ball.

Veteran Kumar Sangakkara was stylish in his 42 made off 49 balls with four fours before he departed in the bowling powerplay, driving Lee tamely to mid-off.

Hussey built upon his success with two more scalps, getting Lahiru Thirimanne (14) caught at the wicket and having Ferveez Maharoof (8) snapped at midwicket as Sri Lanka were reduced to 144 for six in the 31st over and the match seemed to be as good as over in Australia’s favour.

But then the seventh wicket pair flourished and most unexpectedly medium-pacer Kulasekara smashed a career-best 73 off 43 balls with seven fours and three sixes. He put on 104 runs off 70 balls with Tharanga.

Kulasekara’s was a thrilling knock and he became David Hussey’s fourth victim, caught in covers, but not before slamming the part-time off-spinner for two successive sixes over long on.

Earlier, the Australians were set through their paces by opener Warner who hit a career-best 163, the third-highest score by an Australian on home soil and the best ever at Gabba by any batsman in a one-day international.

Warner was out to the last ball of the innings, batting for 157 balls and hitting 13 fours and two sixes. He shared substantial stands of 136, 50 and 64 with fellow opener Matthew Wade (64), Shane Watson (50) and skipper Michael Clarke (37).

Sri Lanka broke through in the 24th over when Wade lofted Kulasekara to long-on and Rangana Herath pulled off an amazing catch, leaping and bending backwards to grasp the chance on his fingertips and then fall just inside the boundary ropes.

Australia continued in the same vein as Watson got into his stride quickly, making 21 off 25 balls before falling to Ferveez Maharoof in the batting powerplay, in the 35th over.

Sri Lanka made quick gains on this breakthrough, claiming Daniel Christian (10) and David Hussey (1). Australia were 230 for 4 at the end of the 40th over.

Warner, all this while, was going strong at the other end, completing his maiden century in the 35th over when he made an unintended cut past keeper for four off Farveez Maharoof. His century arrived off 111 balls with eight fours and two sixes.

Australia again found its moorings through the fifth wicket stand between Warner and skipper Michael Clarke which was broken in the 47th over, having put on 64 runs off 44 balls.

Warner completed his 150 in this very over, having batted for 147 balls and hit 13 fours and two sixes. Australia completed their 300 at the end of the 48th over and they made 91 runs from the last 10 overs.(PTI)