Healy wondered why it's so difficult for the women's team to tour England even as the BCCI plans to go ahead with the rescheduled IPL in the UAE.

Top Australian cricketer Alyssa Healy has expressed disappointment at the cancellation of the Indian women’s team’s proposed tour of England owing to the COVID-19 pandemic. The Indian women’s team was originally slated to play a bilateral series comprising three ODIs and as many T20Is against England in June which got postponed due to the coronavirus outbreak.

But the UK sojourn was called off earlier this week. “Would be sad to see it not happen especially with the hope of a WC (World Cup) early next year,” Healy tweeted in response to a post by Sydney-based cricket writer Rick Eyre.

The ICC Women’s World Cup is scheduled to be played in New Zealand from February 6 to March 7 next year.

Healy’s remark is significant as she is one of the top female cricketers of not only Australia but the world.

Eyre wondered why it’s so difficult for the women’s team to tour England even as the BCCI plans to go ahead with the rescheduled IPL in the United Arab Emirates.

His tweet read, “Why is it harder to send the Indian national women’s team to England than it is to send the entire IPL to the UAE?”

Would be sad to see it not happen especially with the hope of a WC early next year…… https://t.co/VceZXolrOU

A challenging tour of England would have helped immensely in the Indian team’s preparations for the World Cup, reckoned a few from the cricket community after the cancellation.

However, the England and Wales Cricket Board (ECB) said it was in talks with their Indian and South African counterparts to host a tri-series in September.

The women’s T20 World Cup in Australia was the last big-ticket event to be held before the pandemic halted all sporting activities in March.

With cases rising rapidly in India, it is not even clear when the players can assemble for a training camp.

India is one the worst affected countries by the pandemic with over 12 lakh infections and more than 30,000 deaths reported so far. 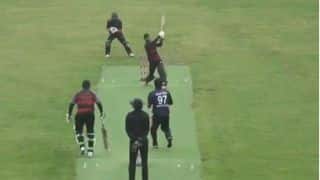