Australia started solidly to score 30 for no loss, trailing by 404 runs in response to England’s 430 all out at lunch on Day Two of the first Ashes Test against Australia at Cardiff on Thursday. David Warner was in a bit of a shell, scoring just 5 off 25 balls, while Chirs Rogers made a 29-ball 15. After Moeen Ali and Stuart Broad put on a useful 52 for the eighth wicket, England got to 430 all out. Moeen continued from his overnight score of 26, and ended up scoring 77 off just 88 deliveries. At the other end, Stuart Broad went on to score 18, with the duo adding an invaluable 52 to help England reach 400. Live Scorecard: England (ENG) vs Australia (AUS) Ashes 2015 1st Test at Cardiff, Day 2

Broad was the first man out on the day, trying to slog sweep one from Nathan Lyon and getting an under edge to the ‘keeper Brad Haddin. His 18 came off 26 deliveries. Moeen continued to bat fluently, hitting 11 fours and a six in his 88-ball 77. He ended up edging Mitchell Starc to Shane Watson at slip. Starc then took his fifth wicket when he had James Anderson bowled for 1. Live Blog: England (ENG) vs Australia (AUS) Ashes 2015 1st Test at Cardiff, Day 2

Earlier, Joe Root, Gary Ballance, and Ben Stokes played defining knocks to take England from a precarious 43 for 3 in the first session to a commanding 343 for 7 at stumps on Day One. Root scored a terrific 134 off only 166 deliveries — it was the sixth fastest Ashes ton by an Englishman — while Ballance dug in for a 149-ball 61, and Ben Stokes hit a stroke-filled 52. For Australia, Mitchell Starc was wayward but managed to take wickets nonetheless, though Mitchell Johnson was largely ineffective on a low and slow Cardiff pitch. READ: The Ashes 2015: England wasting Joe Root at No. 5 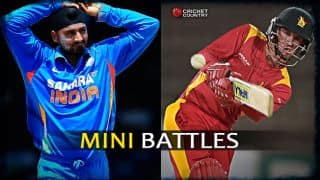 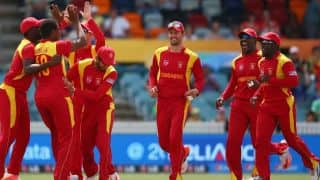