In their reply, Pakistan lost Sami Aslam early on to Josh Hazlewood.

Australia registered their highest-ever total at the Melbourne Cricket Ground (MCG), and declared their first innings in the second Test versus Pakistan at 624 for 8 with a lead of 181 runs, on the final day. Steven Smith scored 165 not out and Mitchell Starc clobbered as many as 7 sixes to score 91-ball 84 to push Australia past 600. In their reply, Pakistan lost Sami Aslam early on to Josh Hazlewood. Earlier in the game, Pakistan had declared at 433 for 9, bolstered by a brilliant 205 not out from Azhar Ali. But centuries from Smith and David Warner (144) negated Pakistan s advantage, and put Australia on top. The hosts lead the three-Test series 1-0.

It was an innings wherein a few records were broken and created. For Smith, this was his 17th Test hundred and 4th in the year. He became the 7th batsman in the year to score more than 1,000 runs in a calendar year a feat which Smith achieved for the third year in a row. But it was Warner who set the tone for Australia with a rapid century. Warner faced 143 balls, cracked 17 boundaries and 1 six to score 144. He added 198 runs at 5.5 an over with Usman Khawaja on Day Three, which set the tone of Australia s domination in this Test.

Smith and Starc took their seventh-wicket stand to 154 runs on Day Five. Smith resumed at 100 not out and added another 65 to his total. On the other hand, Starc flirted with history at MCG to notch up his second highest total in Test cricket. Starc scored 84 off 91 balls, which was studded with 7 sixes. This is a record for most sixes in an innings by any batsman at MCG.

The previous record of hitting most sixes in an innings belonged to Andrew Symonds, who had clobbered as many as 6 sixes against South Africa in December 2005. Symonds scored a 54-ball 72, which was studded with 5 boundaries and 6 sixes.

At lunch, Pakistan were 6 for 1 with Aslam departing for 2 off Hazlewood. Azhar Ali (1) and Babar Azam (3) were at the crease as Pakistan face a tough challenge of surviving the next two sessions. They trail by 175 runs. 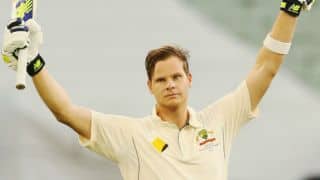