Australia have ended the first session of Day Three of the second Test against South Africa at 205 for the loss of eight wickets, and are staring at a possible follow-on situation.

The South African pacers started off Day Three from where they left off on Day Two fast, mean and got the wickets. Vernon Philander got rid off the set David Warner in the fifth over of the day with a delivery which slightly moved away from Warner, who edged it to Graeme Smith at first slip. Smith didn t make any mistakes, but that wasn t the story with the other South African fielders in the morning session. Hashim Amla and substitute Robin Peterson dropped costly catches of Brad Haddin and Steven Smith respectively.

After Philander got rid off Warner, Morne Morkel ended nightwatchman, Nathan Lyon s resistance in the very next over. Morkel has been the fastest and most hostile of all the South African pacers so far in this match. He has consistently bowled over the 145kmph mark.

The fall of Warner and Lyon s wickets brought Australia s crisis men in recent times, Brad Haddin and Steven Smith to the crease. Haddin got an early life in his innings, when Amla dropped him off Philander s bowling. Smith started off well, hitting quite a few boundaries around the wicket.

Then, once Dale Steyn came into the attack, Smith too was dropped of his bowling by substitute fielder, Robin Peterson. It was a sitter. But Steyn soon got his wicket, as he castled Haddin through the gate with a sharp inswinger. Haddin s middle stump had taken off for a walk.

Mitchell Johnson then joined Smith in the centre, and looked positive in his approach. He played a few glorious drives, and kept the scoreboard ticking along. But then fell to a beauty from JP Duminy.

While wickets have tumbled at one end, Smith has batted beautifully after riding his luck to remain one short of another fifty in Test matches.

It will be interesting to see if South Africa can get the Aussies all out soon enough to enforce follow on. 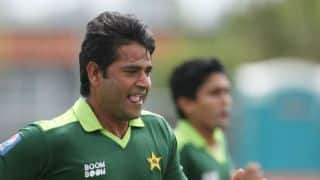