Australia beat England by a whopping margin of 405 runs to level series 1-1 in 2nd Ashes Test at Lord's.

Australia complete the annihilation of England winning the second Ashes Test at Lord’s, London by 405 runs. Australia have been superb in the entire Test and did not let slip of the intensity at any moment. They hit England as a team and the hosts were left with their old scars open for Australians to further deepen. England were bundled out for 103 in just 37 overs to surrender completely to the Australians who were breathing fire. Both teams now head to Edgbaston but this beating from Australia will hurt England a lot given they were beaten on a deck which was supported to suit them and not Australia. England will suddenly have a lot of catching up to do. Read: Ashes 2015, 2nd Test at Lord’s: Australia leave England behind in their own game

England were in tatters at the tea break, having already lost half their side. They were 64 for five with Joe Root and Jos Buttler being the two batsmen batting. England had lost Adam Lyth early again, poking at one he should have left. Alastair Cook did not convert his good first innings score and fell for 11, trying to cut Mitchell Johnson. Gary Ballance fought hard but edged first ball from Mitchell Marsh to get out for 14.

Ian Bell was all at sea and got a life when Adam Voges dropped him at first slip but he got out caught at short leg off the bowling of Nathan Lyon. Ben Stokes was out in bizarre manner when he leapt up to avoid getting hit but ended up getting run out leaving England in danger at 64 for five. Live cricket updates: England vs Australia, 2nd Ashes 2015 Test, Day 4

Australia started the post Tea session taking wicket of the very first ball when Buttler edged Johnson behind to leave England reeling at 64 for six. Moeen Ali lasted four balls and was out caught at forward short leg. Stuart Broad and Root scored some quick runs to try and delay the loss but Broad fell trying to hit Lyon over cover and found Voges to depart for an entertaining 25. Read: Ashes 2015: England’s top order a major issue

Josh Hazlewood then came back to castle Root and then bowled James Anderson to complete a dismissive 405-run win over England. Mitchell Johnson finished just one short of 300 Test wickets. The Australian bowlers will be delighted with their work on this placid pitch and will be hoping to continue their good work going further into the Ashes 2015. It was a great effort from them and they bowled with good intent, good energy.

Australia earlier declared on 254 for 2 declared, setting a target of 509 for the home side. David Warner and Chris Rogers did the bulk of the scoring for them notching up a 114-run opening stand. Chris Rogers went off the field feeling dazed, he though is alright now and being monitored closely. Read: Steven Smith: 192, 199 and then 215 — the record-making machine

David Warner raced away to 83 but fell trying to hit Moeen Ali over cover to be caught by Cook. Ali then returned to dismiss Steven Smith too but by the time the Australian departed he had already scored his 12th Test fifty, becoming only the fourth player to score a 200 and a fifty in a Test.

It was the stand between Alastair Cook (96) and Ben Stokes (87) that saved England some blushes in their first innings. Both of them missed out on their tons as Mitchell Johnson and Josh Hazlewood finished with three wickets each. It has been a near perfect Test for Australia after they put on a huge total of 566 for eight declared thanks to Steven Smith (215) and Chris Rogers (173). Stuart Broad was the best bowler for England with four for 83. Catch live cricket scores and updates of England vs Australia 2nd Ashes 2015 Test at Lord’s, Day 4 here

On Day One, Australia won the toss and elected to bat first. Australia made a couple of changes, bringing in Mitchell Marsh and Peter Nevill for Shane Watson and Brad Haddin. England went into the game unchanged from the previous Test.

Man of the Match – Steven Smith! 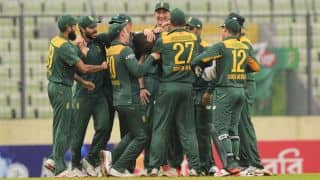 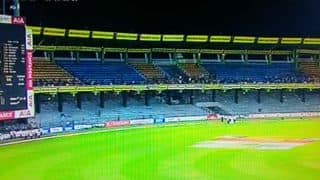