Australia set to announce Test squad for their upcoming tour of New Zealand where they are scheduled to play two Tests after the end of their three-match One-Day International (ODI) series. While the shorter format series begins from February 3, the two Tests will be played in Wellington (February 12-16) and Christchurch (February 20-24). Cricket Australia’s national selector Rodney Marsh will make the announcement. However, the team for the ODIs will be announced a little later. It is going to be the last international series of New Zealand skipper Brendon McCullum. At present, Australia is playing India at home in the limited-overs series, New Zealand are hosting Pakistan for three-match ODI and three-match Twenty20 International (T20I) series. READ: David Warner: ODI cricket now being played along the lines of Test cricket

Australia play their last match against India on January 31 and two days later they begin their away series against New Zealand. Steven Smith will expect his side to take no time to get used to the neighbouring conditions in order to aim to replace India as the top-ranked Test side.
According to ESPNCrcinfo, Smith said, “There’s a lot of ways where you can replicate what you’re going to get. You can get soft balls and get them to swing, you can bat on grass against spinners for subcontinent where the ball does unpredictable things, so things like that where you can work on what you’re likely to face and try to find a way to be successful against it.”

“We’ve always played quite well at home but the challenge for us is to make sure we’re winning series away from home, and that starts with a tough series for us in New Zealand. Hopefully we can adapt to the conditions we’re going to be faced with in New Zealand, I dare say they’re going to have a bit of grass on them and they’re going to swing a little bit so we’re going to have to be better than we have been previously on those sorts of wickets, hopefully we can adapt well,” he added. 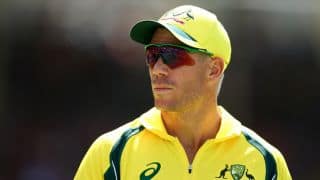 David Warner: ODI cricket now being played along the lines of Test cricket