Australia to play an ODI in Ireland

Australia to play an ODI in Ireland

Ireland is currently on a preparatory tour of New Zealand for next years ICC World Cup.

The Australian team will travel to Belfast, Ireland to play one One-Day International (ODI) against the hosts on August 27, 2015. In the wake of Ashes tour of England next year Cricket Australia (CA) has accommodated this short tour. Ireland will also host England (May 8) for an ODI and the ICC World T20 qualifiers (jointly with Scotland) in the same season.

Ireland is currently on a preparatory tour of New Zealand for the next year’s ICC Cricket World Cup. But unfortunately their recent game against the hosts was washed out due to rain. After that Ireland  moved to Christchurch, where they played Canterbury. The Irish boys suffered heavy defeat (They lost by 117 runs). The tour will end with their last match against Otago on October 23.  The experience of this current tour of New Zealand will help Kevin O’Brien and co. immensely when they will play in the World Cup. 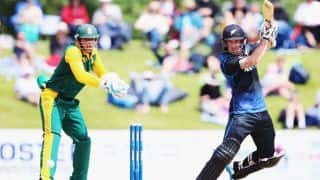