Ravi Bopara starred with both bat and ball as England coasted to a six-wicket win over Australia with 26 balls to spare in the second one-day international (ODI) at The Oval on Sunday. 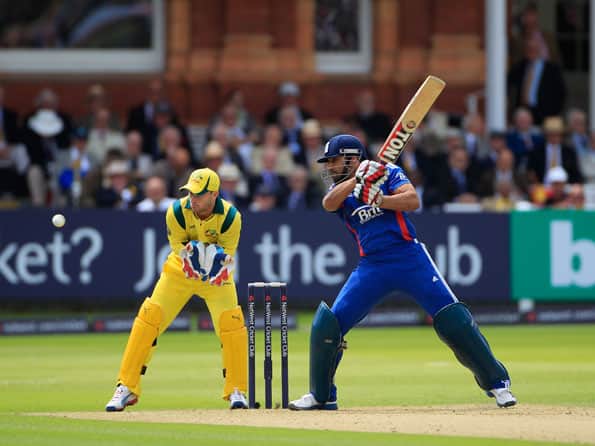 Ravi Bopara starred with both bat and ball as England coasted to a six-wicket win over Australia with 26 balls to spare in the second one-day international (ODI) at The Oval on Sunday.

England saw all-rounder Bopara top-score with 82 in a total of 252 for four after taking one for 16 with five overs of his medium-pace as Australia were restricted to 251 for seven.

“I enjoyed myself out there. I told myself just to watch the ball, and hit it, and I play my best when I do that,” said Bopara. “I think I’m batting the best I ever have.

“A few changes that I’ve made over these last six months have really worked for me.”

England’s eighth successive ODI win gave them a 2-0 lead in this five-match series after Friday’s 15-run victory at Lord’s.

It also kept them on course for a 5-0 whitewash that would see them replace arch-rivals Australia at the top of the 50-over world rankings.

But victory was far from certain when, two balls after Australia captain Michael Clarke bowled Ian Bell for 75, the left-arm spinner appealed for lbw against Eoin Morgan, still then on nought.

Eventually, after several minutes’ study, third umpire Aleem Dar, one of world cricket’s most respected officials, told Illingworth to reverse his decision on the basis of a ‘Hotspot’ replay that indicated a faint edge.

England were still 171 for three, not 171 for four, and left-hander Morgan, man-of-the-match at Lord’s with an unbeaten 89, pressed on to 43 not out, having helped Bopara add 79 at better than a run-a-ball for the fourth wicket.

“Our bowlers also did well. We put that squeeze on between 25 and 35 overs, and that really took 20 to 30 runs off their score.”

Clarke added: “England deserve a lot of credit for the way they bowled.”

Opener Bell made Australia pay Sunday for dropping him on 38 and 70 with a typically stylish 113-ball innings featuring one six and six fours.

Australia left-arm quick Mitchell Johnson, replacing Pat Cummins after the teenage paceman was ruled out of the rest of the series with a side injury, helped England with a couple of early no-balls that led to free hit fours.

The seamer’s first two overs cost an expensive 20 runs and left-arm spinner Xavier Doherty then saw his opening delivery eased through the covers by Cook.

But seamer Clint McKay had left-hander Cook lbw for a run-a-ball 18.

Bell advanced down the pitch to drive medium-pacer Shane Watson straight back over his head for an elegant six.

But, four balls later, Warwickshire team-mate Jonathan Trott tried to follow his lead and instead was clean bowled by the medium-pacer.

Johnson, the butt of England fans’ jokes when struggling in successive Australian Ashes defeats, returned only for Bopara to sweetly time a drive past mid-off for four.

Earlier fast bowler Steven Finn led England’s pace attack in the absence of James Anderson, out with a groin injury, by taking they key wicket of dynamic opener David Warner for just 10 on his way to one for 36 in nine overs.

However, the tourists’ innings was often becalmed, with a mere 24 runs coming in a 10-over spell from overs 21 to 30 inclusive.

“Rotation of strike is an area of our game we know we need to improve,” said Clarke. “I still think 250 was a competitive total. But I did know we had to bowl very well and hang on to our chances and we certainly didn’t do that.”

The series continues with a day/night match at Edgbaston on Wednesday.(AFP)

PCB in favour of DRS for Australia ODI series