Australia tour of India 2016-17: Shane Watson hopes for a comparatively better trip than in 2013

Australia tour of India 2016-17: Shane Watson hopes for a comparatively better trip than in 2013

Former vice-captain Shane Watson has backed the Australian team to do better than their last trip to India in 2013, wherein they were blanked 0-4.

Shane Watson has backed the Australian team to do better than their last trip to India in 2013, wherein they were blanked 0-4. Watson was a key member of the Australian squad in the 2013 series, even captaining them in the fourth and final Test at New Delhi, when Michael Clarke suffered a back injury. Australia will be touring India for a four-Test Border Gavaskar Trophy 2016-17, which begins on February 23. It will be the biggest test for Steven Smith and co, since they have lost all of their previous 9 matches in the Indian subcontinent a wretched run which began with their tour in 2013.

“It really can’t get any worse than what it was in 2013,” Watson told cricket.com.au. he continued, “So that’s a good starting point because that’s as bad as it can get, players getting suspended from a Test match. I’m sure that won’t happen this time.” Watson flew back home midway through the tour, after he was banned from the third Test at Mohali for failing to submit a homework assigned by former coach Mickey Arthur. Watson flew back home and returned in time to lead Australia in the final contest, which they lost as well.

“Obviously the way that you win over there is through spin bowling, but not necessarily just only spin bowling. The time the Aussie team won in 2004, they only had Shane Warne and three quick bowlers. It’s more so just playing to your absolute strengths, playing your best players, who’ve got the best chance of being able to play in those extreme conditions than what we’re used to, Watson said.

Watson also backed the 20-year-old opener Matthew Renshaw, who nearly scored a double century in the third and final Test between Australia and Pakistan at Sydney. “He knows his game incredibly well and I’m sure he’ll just stick to his game plan like he did in the Test matches he’s played. I’m sure he’ll have a lot of success. For a young guy to be able to have so much control over what he’s doing, shows he’s got what it takes to be successful in any conditions.” 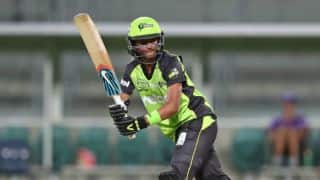