After starting their tour of United Arab Emirates (UAE) with a clinical six wicket win in the T20 international against Pakistan, Glenn Maxwell, Australia‘s hero of the match said that the current Australian team is one of the best team in this format. In the post match press conference he said, “You look at our T20 ranking, I don’t think [it] is a good show of where we are as a T20 team in the world. We’re one of the best, I just don’t think we play enough together.”

Maxwell was named man of the match for his career best bowling performance [3 for 13 in four overs] and, with impressive displays from the glut of debutants at the Dubai International Stadium, the team is eying a climb up the T20 rankings. The ever-smiling all rounder said, “That’s what we were aiming to do tonight, to really put our front foot forward and basically put a dent in Pakistan and make it harder for them to come back for the rest of the time we’re here.”

Maxwell further added, “To start a series like that where it’s a really dominating win with six overs left is a great way to start a tour. If you can keep your foot on the throat the whole way through the tour and basically stay on the opposition the whole way through it just shows what you’re really here to do. It’s something we haven’t done in an away series for a while. Especially going back to the India tour where India just basically stood on us the whole way through that series and it was tough to come back from. Hopefully we can do that to Pakistan and go home with six wins.”

Maxwell also praised the Hobart Hurricanes leg-spinner Cameron Boyce. “To perform like that on the big stage, in your first international game is a super effort. He was landing them and spinning them and showcasing his full skill. Hopefully he can keep doing that for Australia,” he signed off. 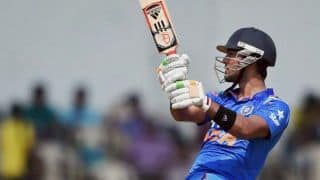