Australia tour of West Indies 2015: Visitors on alert after journalist gets mugged

Australia tour of West Indies 2015: Visitors on alert after journalist gets mugged
By CricketCountry Staff

The Australian players touring West Indies for the two-Test Frank Worrell Trophy have been asked to remain vigilant after an Australian journalist was attacked by a couple of knife-wielding men on Saturday evening at the Dominican capital of Roseau, the venue of the first Test.

Brettig, an assistant editor with ESPNCricinfo, was withdrawing cash at an ATM at around 10 pm when the incident occurred. According to cricket.com.au, Brettig was slammed to the ground face first, and was deprived of his mobile phone and wallet. Brettig was later treated at a local hospital for a bloodied nose, and a couple of other minor injuries.

The attack on Brettig however, is not the only one to be reported in the island. An employee of Ten Sports, the official broadcaster of the series, as well as an Australian fan were attacked in a similar manner. The Australian players were informed of the incident by team manager Gavin Dovey, and were told to be extra cautious when venturing outside their hotel. READ: Australian players donate kits to Dominica’s Kalinago people

Brettig however, defended Dominica by passing it off as a one-off incident, and that it did not affect his love for the Caribbean nation.

Thankyou everyone for the kind words. Could have been so much worse. Am not going to let it affect my high opinion of Dominica #cricket

“Thankyou everyone for the kind words. Could have been so much worse. Am not going to let it affect my high opinion of Dominica,” Brettig was quoted as saying in a post on his Twitter account.

Australia are currently leading the series 1-0 after a dominating nine-wicket victory in the first Test at Roseau, which saw Adam Voges score a century on debut. West Indian debutant Shane Dowrich too impressed with a half-century in the second innings, though the a collapse in the batting saw the hosts set an easy target for Australia. READ: Australia thrash West Indies by 9 wickets in 1st Test 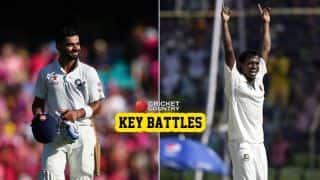 Six reasons why Zaheer Khan should be India’s bowling coach