Australia began their first innings session, they too were off to a slow and shaky start.

Former Test champions, Australia lost three quick wickets during initial stage of their first innings play, but just trail by 63 runs against West Indies, at stumps on Day 1 of the first of the two-match Test series at Windsor Park in Roseau, Dominca.

West Indies were off to shaky start as they struggled at 85 for the loss of three wickets during the lunch break, while the post-lunch session saw a complete meltdown of the West Indian batting line-up and were bundled for just 148 at the stroke of tea break. Shai Hope was the only top scorer with 36 runs, while Mitchell Johnson and Josh Hazlewood claimed three wickets each for 34 and 33, respectively.

As Australia began their first innings session, they too were off to a slow and shaky start as at the score of just 13, it was their explosive opener, David Warner, who fell for mere eight to Jerome Taylor. With 15 added to the total, fellow opener, Shaun Marsh too made his way back for just 19, after falling to Jason Holder off his very first ball. LIVE BLOG: West Indies vs Australia 1st Test, Day 1 at Dominica

The experienced pair of Steven Smith and skipper, Michael Clarke was expected to fire and play a big innings comprising of big knocks as well. However, it didn’t happen as at the score of 31, it was Clarke, who departed for just 18 after falling to leg-spinner, Devendra Bishoo. The pair of Smith and Adam Voges were the last pair to survive the day out and have together so far put 24 runs, Australia are 85 for the loss of three wickets. 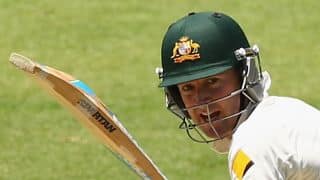