Both Australia and Bangladesh will want to win their second match after losing their first against New Zealand and Pakistan respectively in T20 World Cup 2016.

Australia take on Bangladesh in Match 22 of the T20 World Cup 2016 at M Chinnaswamy Stadium, Bengaluru. Catch the live cricket telecast of the match on Star Sports 1 and Star Sports HD1. If you do not have access to television, catch live cricket streaming on starsports.com. Also, catch the live cricket streaming on you mobile on Hotstar. If you are in Bangladesh, catch the live telecast of the match on BTV. Both Australia and Bangladesh have lost their first match of the tournament. While Australia lost to New Zealand in their match, Bangladesh lost to Pakistan by a huge margin. This is a big match for both the teams and will have to win it, if they are to have any chances of making it to the semi-final. FULL CRICKET SCORECARD: Australia vs Bangladesh, ICC World T20 2016, Super 10 Group 2, Match 22 at Bangalore

Australian failed to chase down 143 against New Zealand, but should have a field day when they take on an inexperienced Bangladesh side. They may go in with an extra seamer for this match, with Andrew Tye making an appearance in place of either Adam Zampa or Ashton Agar. READ: Live Updates, Australia vs Bangladesh, T20 World Cup 2016 AUS vs BAN, 22nd T20 Match at Bangalore

With absence of Taskin and Sunny, there is a clear imbalance in the Bangladesh side, who are now  more dependent on their batsmen. The recent forms of Tamim Iqbal, Sabbir Rahman, Mahmudullah and Shakib-Al-Hasan have been encouraging.

On paper, Australia are the more superior side, but Bangladesh, like they have done in the past might just surprise the mighty Aussies. Bangladesh’s resurgence in the recent times has been commendable. They reached the Asia Cup T20 final recently, where they beat teams like Pakistan and Sri Lanka, but lost in the final to India. 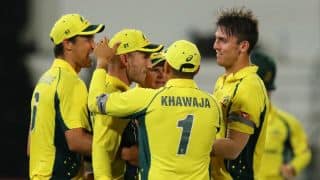