Chris Woakes has been dismissed in the first One-Day International (ODI) against Australia at the Sydney Cricket Ground. Woakes played one from Glenn Maxwell straight into the hands of mid-wicket. England are now 170 for seven in 41 overs and it has been held together by Eoin Morgan. England will have to work very hard to get a good score.

England had been under pressure since the first ball as Ian Bell was dismissed leg-before. However, after that the slide continued as James Taylor went two balls later. And, then they lost Joe Root and Ravi Bopara. And, then there was a good partnership between Morgan and Jos Buttler but Morgan has held the innings together. 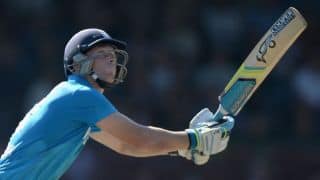