Warner has helped Australia get off to a good start.

David Warner has reached his fifty against England in the first One-Day International (ODI) of the tri-series. Warner has made his 11th ODI fifty and has put Australia on course to a victory here. Warner has batted with his usual dominance and has ensured that Australia got off to a good start despite the loss of Aaron Finch and Shane Watson.

England set only 235 as a target and Australia will be the favourites here. Australia have a good batting wicket, with batsmen in form, so it should not been an issue here. India is the third team in this series and they will also present a challenge here. 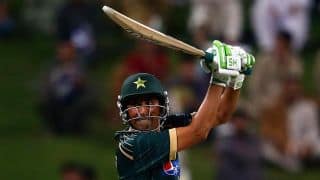