Eoin Morgan, the England skipper scored a fighting hundred which helped England to get past 200 run mark in the first game of the Tri Series against Australia. England lost three quick wickets when Morgan walked in the crease. Since then he held one end and played an excellent innings. His hundred came in 127 balls. But no one apart from him showed the urge to stay at the crease. The next highest score after Morgan is Jos Buttler’s 28.

Earlier Morgan and Buttle put up 57 runs for the sixth wicket. In fact, they got their 50-run stand in 97 balls. It showed the kind of pressure they were under to resurrect the innings at hand. 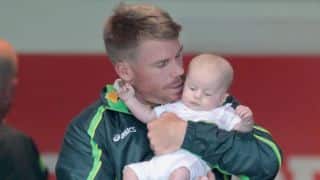