Man of the Match Starc said he is pleased with his performance.

Quite pleased with his personal form but devastated by the team’s loss, England cricket captain Eoin Morgan today blamed the defeat against Australia in the ODI tri-series opener on the top-order collapse triggered by pacer Mitchell Starc.

England managed to post a 235-run target for Australia riding primarily on Morgan’s 121-run knock. The rest of the line-up found the going tough, especially against pacer Mitchell Starc, who returned figures of 4 for 42 in 8.5 overs.

“(Mitchell) Starc swings the ball like Jimmy Anderson, so credit to him. We still won’t know what a par score is if we look back, losing wickets throughout the innings cost us.

“I was happy with my performance to start like this as captain but devastated at the result. (Chris) Woakes bowled well, Moeen Ali held his own as well. Looking forward to play India after four days,” he added.

His rival number George Bailey lauded his team for not just pulling off a win but also getting a bonus point.

Australia’s chase, highlighted by opener David Warner’s 127, derailed for some time by the loss of quick middle order wickets.

“Outstanding, and especially the start Starc gave us.

He’s coming down at really good pace and he can rip through the heart of a team. (Pat) Cummins is coming along nicely as well and (Mitchell) Johnson will be back with (Josh) Hazlewood so we have some good pace.

“It’s a challenging tri-series here. We were reasonably late to go for the bonus point, maybe in the Powerplay and Warner deserved to get his hundred. We made sure he got it and then went for the win, trying to make sure it didn’t get messy,” he said.

Man of the Match Starc said he is pleased with his performance.

“To contribute to a win is always great and make Australia win is what we play for. The ball came out nicely and they got some partnerships in the middle but as a whole we bowled really really well. It’s fantastic to see Warner bat like that, he’s had a great summer and showed it tonight as well.

“There’s healthy competition among the fast bowlers in the squad, everyone’s looking for games and wickets in the tri-series and in the lead up to the World Cup,” he said

When the Sheikh got entitled for a 'new ball' 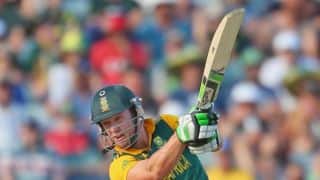