Australia would be without Michael Clarke but have the armoury to down any opponent on home soil.

Australia take on England in the 1st ODI of the tri-series of 2015 at the Sydney Cricket Ground (SCG) on Friday. This is the final ODI series for both the teams, including India as the the third team, before the ICC World Cup 2015 scheduled to get underway from February 14.

England, who come fresh into the game following a disappointing series loss against Sri Lanka last month had a good warm-up tie against PM XI, a couple of days ago. They would surely look to turn the tables around and quickly get results in their favour in order to put early pressure on Australia and be positive before the World Cup.

Australia would be without Michael Clarke but have the armoury to down any opponent on home soil. George Bailey will lead Australia in the absence of Clarke and this unit has all the other World Cup squad members.

Australia would be without Mitchell Johnson though, who is out nursing an injury. Instead, they have Pat Cummins, Josh Hazlewood, Mitchell Starc and James Faulkner as the other fast bowling options. 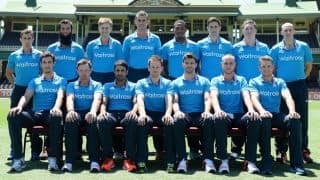