England, after the 0-4 Ashes humiliation, struck back and notched up their first win in Australia. In pursuit of 305 in the series opener of the five ODIs, England sailed past Australia courtesy Jason Roy storm. Roy, in addition, scored the highest individual score by an Englishman (180), surpassing opening partner Alex Hales. England have a better record than any other team since 2015 World Cup, winning 35 of 54 matches. They will look to consolidate from the first ODI victory.

Australia, on the other hand, looked set to rest Pat Cummins for the second ODI. However, Josh Hazlewood his likely replacement is out of contention due to illness. Their bowling looked weak despite the presence of Mitchell Starc. The likes of Marcus Stoinis and Andrew Tye need to step up. In their batting lineup, Australia would look to challenge a batting-heavy England by posting anything close to 340-50. India vs Zimbabwe, Pakistan vs Sri Lanka, ICC U-19 World Cup 2018: Watch IND vs ZIM and other matches Live Streaming on Hotstar 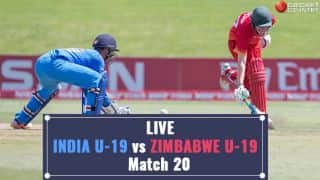