Australia won the toss on Day One and elected to bat first. Stuart Broad starred with the ball for England as he took six wickets as Australia were bowled out for 295. Brad Haddin top-scored with 94. England were bowled out for 136. Mitchell Johnson took four wickets. In the second innings, Australia declared at 401 for seven. David Warner top-scored with 124 and Michael Clarke scored 113. They set England a target of 561 runs. England were at 24 for two at stumps on Day Three. 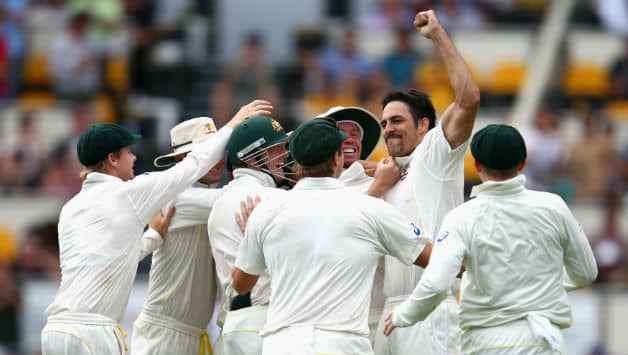 Tremlett gets a bouncer from Harris and he opens the face of the bat and guides it over gully for a four. Harris bowls another bouncer and Tremlett nearly gifts a catch to Haddin. But next ball, he gets caught by George Bailey at forward short-leg. James Anderson is the last man in. Australia have a chance to win the match, but Lyon dislodges the bails before collecting the ball and Root makes his ground.

Australia have taken the new ball. Root gets a four through mid-wicket off Harris. Johnson then finishes off England as Anderson hits one back to the bowler.

Australia win the first Test by 381 runs and 1-0 up in the series. Johnson was the adjudged as the Man of the Match.

Aussies have outclassed,Out fought and certainly out paced the England side this week… #Ashes

The rain clouds are looming over The Gabba again. And this time it looks even darker. Root and Tremlett are trying their level best not to hand Australia the two wickets they are desperately looking for. Harris bowls a short delivery at Root and he nudges it to fine-leg for two runs. Next ball, he drives straight down the ground to get a four through long-off. Smith has been brought into the attack. The ground staff are waiting just behind the boundary if and when rain halts play.

Rain has stopped play again on Day Four. Is this the rub of the green that England need? The only thing is that there is a whole day left in the Test. We will bring you live updates as soon as play resumes at The Gabba.

Johnson concedes a single so that Broad comes on strike. The first ball Broad faces off Johnson, he edges it to Haddin. The ball was fast, short and on the leg side and Broad could not get away from it. Graeme Swann was the next man to follow as he edged his second delivery to Steven Smith at third slip. That was Johnson’s fourth wicket of the innings.

Chris Tremlett then takes evasive action as Johnson bowls a bouncer. The ball hits the elbow pad and Shane Watson takes the catch in the slips. The players appeal, but the umpire says not out and rightly so.

Eng getting thrashed..but not to concerned. 12 wickets caught on the leg side, very unusual…b more worried if they were bowled & lbw

Welcome back. Johnson completes his over and it is a fast one to Root. Lyon comes from round the wicket and bowls a length delivery that has a bit of extra bounce. Cook goes for the cut, but edges it to Haddin, who takes a good catch. Is that all over for England? Or was it already all over? Just a matter of time, one would think for Australia.

Matt Prior cuts in the air through third-man, but evades any fielder there and he gets a four to get off the mark. After Root survives another fiery over from Johnson, Australia strike again. Clarke has a leg-slip for Prior and Lyon bowls on his pads from round the wicket. Prior tries to work it away on the leg side, but only manages to hit it straight to Warner. Prior fell for the setup.

Stuart Broad is the next batsman and he thumps one from Lyon back over his head for a four to get off the mark.

Joe Root is the new man in and he is tested with a few probing deliveries from Johnson and Siddle. He takes nine balls to get off the mark, as he drives Siddle straight down the ground for a four. Lyon is back and bowls one from round the wicket to Cook. The ball is short and Cook goes for the cut. The ball finds a thick edge of the top of the bat and surprises Michael Clarke at first slip as he misses a tough chance. Cook gets two runs. He then plays a hard drive and it hits David Warner on the leg at silly point.

Cook then cuts another short ball from Lyon and gets three runs towards deep point. There is a big cloud cover coming close to The Gabba. The ground staff is readying themselves behind the boundary. This is not what Australia want.

The rain has come and has stopped play now. The covers are up and there are messages on the sight screens and the big screens at The Gabba about a storm warning. In fact a hail storm begun and has stopped now. We will bring live updates as soon as play resumes.

And now the thunder and heavy rain… pic.twitter.com/r242860fxh

Johnson continues with his ploy of bowling from round the wicket to Cook. After a few of his quick short deliveries are left alone by Cook, Johnson has a few words with the England captain. As expected, Cook does not respond. The Bell then drives straight down the ground off Harris to get two runs. A few deliveries later, he pulls Harris for another two through mid-wicket.

Siddle comes back int the attack and bowls one just outside off-stump. Cook is slightly late on playing a defensive stroke and the ball takes a thick edge of the bat and goes in-between the slips and gully for another two runs. He actually might have played that quite intentionally with soft hands.

Harris then bowls an off-cutter to Bell and the ball hits a crack and goes away from Bell. The next ball also hits a crack and skids in sharply. Next over, Siddle gets one to bounce a bit more off a crack and Bell is unable to take his bat out of the way in time. The ball kisses the edge of the bat and Brad Haddin takes the catch.

Johnson charges in to bowl the first over after lunch. He bowls one on the pads and Cook glances it away for a two. He then bowls one short and Cook pulls for a single towards deep square-leg. Johnson then bowls short and wide to Bell, who plays an upper cut over the slip cordon for two runs. Harris also bowls one short at Cook and the England captain pulls again for a single. Harris bowls a fuller delivery to Cook and he drives through covers for a three.

Johnson now comes from round the wicket to Cook and bowls a short delivery. Cook, off the back-foot, plays a delightful cut in-between gully and point to get a four. In doing so, he reaches his half-century. That is England’s first individual fifty of the series. That is also Cook’s 33rd half-century in Tests. Johnson, almost angered by the shot, bowls another short delivery. Cook plays an upper cut over the slips for a four. Johnson bowls one on the rib cage and Cook nudges it for a single on the leg side. Bell then drives a full and wide delivery for a two in front of square on the off side.

Shane Watson has been brought into the attack. Watson bowls a full delivery and Cook nearly gifts a return catch back to the bowler. Smith continues and Bell hits one very straight down the ground for a four. Harris tries his level best to pull the ball back in, but is unable to and instead goes and bangs into the boundary boards head first while in his slide. He gets up and jogs back to his fielding mark. All well, but a slightly scary moment for Australia. They do not want their strike bowler getting injured in a freak manner.

Bell then hits one aerially down the ground for another four. Lunch is taken as England still need an improbable 463 runs to win.

Message to all my English followers who have been sledging me during the last ashes series. Hope you’re enjoying Brisbane hahaha !!!!

The scoring has slowed down considerably now. The ball is not doing much, but England are in a position where their focus is not that much on getting the scoring-rate high. Steven Smith has been brought into the attack. Smith is a right-arm leg-spin bowler. He bowls one fuller and with a bit of flight and Bell reaches to the pitch of the delivery and drives past short extra-cover to get a four.

After playing a few cut shots off Lyon to the point fielder, Cook finds the gap between point and cover and runs three. Johnson strikes to dismiss Pietersen. He bowls a back of a length delivery and Pietersen goes for the hook but does not put everything into it and substitute fielder Chris Sabburg takes a good catch at fine-leg. Poor shot from Pietersen as he had done all of the hard work up until then. Ian Bell is the next batsman and he gets a barrage of quick short deliveries from Johnson.

This is the 28th time Cook and KP have registered a 50 partnership. They have gone on to reach 100 on 13 occasions at average of 66 #Ashes

Nathan Lyon has been brought into the attack. He comes in from round the wicket and bowls full outside off-stump to Pietersen, who clears his left foot and drives through covers for a four. Pietersen is looking to attack Lyon as he charges him twice and gets a couple of twos behind square on the leg side. Lyon then bowls a short and wide delivery to Cook, who cuts it in front of square on the off side for a two.

Mitchell Johnson comes into the attack. He is not very accurate in the first over as he bowls a few deliveries down the leg side and that allows Cook to get a couple of twos. England have reduced the deficit below 500-run mark!

Peter Siddle begins proceedings on Day Four. Kevin Pietersen gets England off the mark on the day with a single behind square on the leg side. Siddle found the inside edge of Pietersen’s bat, but there was no bat pad. Ryan Harris bowls the second over on Sunday. Pietersen takes a big stride forward to a full delivery from Harris and hits the ball for past mid-off. Alastair Cook gets his first run of the day with a single towards long-leg.

Hello I am Shrikant Shankar and welcome to CricketCountry’s coverage of Day Four of the first Ashes 2013-14 Test in Brisbane at the Gabba. Australia won the toss on Day One and elected to bat first. Stuart Broad starred with the ball for England as he took six wickets as Australia were bowled out for 295. Brad Haddin top-scored with 94. England were bowled out for 136. Mitchell Johnson took four wickets. In the second innings, Australia declared at 401 for seven. David Warner top-scored with 124 and Michael Clarke scored 113. They set England a target of 561 runs. England were at 24 for two at stumps on Day Three.