Mitchell Johnson is the Man of the Series after taking 37 wickets in the five matches.

Broad hooks a short delivery from Harris for a six. Next ball, he gets bowled by Harris. Boyd Rankin ducks underneath the first delivery, but edges his second to Clarke at second slip. That is it. Australia have won the fifth Ashes 2013-14 Test by a massive 281-run margin. They have completed the historic 5-0 whitewash over England.

Johnson is targeting Broad and bowls a barrage of bouncers aimed directly at him. Stokes then decides to hit Lyon out of the attack. The first ball is short and is cut through extra-cover for a four. The second delivery is hit down the ground for a six. Stokes came down to the third delivery and hit the ball down the ground for a four. The fifth delivery of the over is hit over the bowler for another six. That was 20 runs in one over. Johnson then bowls a a full and wide delivery and Broad smashes that through the covers for a four. Stokes then comes down the track to Lyon and hits one inside-out over extra-cover for a four. Broad then slog-sweeps Lyon for a six.

Harris then gets the breakthrough as Stokes inside edges one onto the stumps. An enterprising innings has come to an end. Stokes has been England’s best player in the series. Broad then pulls one from Harris over mid-wicket for a four. Broad then hits two sixes in one over off Lyon.

Welcome back. Johnson will bowl the first over after tea. He strikes second ball as Carberry edges a cut to Haddin. The ball was at a back of a length and it bounced a little extra. That was enough for the edge. Ben Stokes is the next batsman in. He gets off the mark with three runs towards mid-wicket off a back of a length delivery. Ballance then gets trapped on the pads by Johnson and he is out leg-before. The ball was fast, straight and kept a little low. So, in the first over after tea, England have lost two wickets. Nathan Lyon then dismisses Jonny Bairstow in the second over after tea.

He finds the inside edge off Bairstow’s bat and the ball bounces off the pads and George Bailey takes a reflex catch at forward short-leg. Scott Borthwick hits a four first ball through extra-cover. Lyon then pitches one on leg-stump and the ball moves away sharply. But Borthwick edges it and Michael Clarke takes a stunning left-handed catch at first slip. So, England have lost four wickets from the first two overs after tea. Johnson bowls a testing over to Stuart Broad. Lyon comes in and Broad slog-sweeps a straight delivery for a four thrugh deep mid-wicket.

Ballance pushes one from Lyon towards backward-point for two runs. Johnson bowls one full at off-stump and Carberry hits that past mid-off for a four. Johnson digs one in short and Carberry frees his hands and slashes hard. The ball takes a thick edge and goes over the slips for a four. Johnson then bowls at the ribs and Ballance flicks it to fine-leg for two runs. Ballance then drives a length delivery from Lyon for a four. That is tea on Day Three, England need another 361 runs to win. More importantly, Australia are only seven wickets away from a 5-0 whitewash.

Siddle bowls a full delivery and Carberry plays a strong cover drive and gets a four. Harris bowls one straight and Pietersen gets a thick inside edge onto his pads and the ball loops up in the air. George Bailey, at short-leg, takes a brilliant one-handed catch as the ball goes behind him. There is a big appeal for caught-behind as Lyon gets one away from Carberry’s bat. The batsman takes his bat away in time, but Haddin appeals, while Lyon does not. The umpire says not out and Michael Clarke is forced to ask for the review. The replays do not show any edge, nor do the Hot Spot and Snicko. So the decision remains as not out.

Harris bowls a maiden to Ballance. There is also an appeal for LBW, but it is waved off by the umpire. Lyon then bowls a long-hop and Carberry whacks that over the extra-cover fielder for a four. Carberry then gets a couple of twos in one over from Harris.

Peter Siddle has been brought into the attack. He bowls a back of a length delivery and Bell hits that over extra-cover for three runs. Siddle then offers width and Carberry punches that off the back-foot for a for towards deep cover. Johnson drags one short and Bell plays the cut shot and gets a four through point. Johnson then digs one in short and Bell plays a brilliant upper-cut and gets a six over third-man. Harris bowls a wide delivery and Bell plays the cut, but hits it straight to David Warner at gully. Kevin Pietersen is the new man in. Siddle bowls a full delivery and Carberry gets a thick outside edge and the ball races away for a four towards deep point.

Carberry then gets a four down the ground off Siddle. Pietersen gets off the mark with a cover drive for three. Carberry defends the last ball of Harris’s over, but the impact of the ball breaks the bat in nearly two parts. Only a few strands of wood hold the two parts together.

Alastair Cook and Michael Carberry walk out to open the innings for England. Ryan Harris will begin proceedings for Australia. Cook gets off the mark with a single towards long-leg. Mitchell Johnson comes from the other end and bowls one short outside off-stump. Cook plays the pull shot and gets a four through deep mid-wicket. Cook then pushes one through extra-covers for two runs. The next ball is a back of a length delivery and outside off-stump. Cook goes half-way with a poke and then tries to withdraw as the ball moves away. But Cook gets a thin edge and Brad Haddin takes the catch behind the wickets. That is the end of a poor series for the England captain.

Harris comes from round the wicket and bowls a fuller delivery. Carberry drives that through the covers for a four and gets off the mark. Johnson bowls a maiden over to Ian Bell. Harris then bowls one way down the leg side to Carberry and that goes for four byes. Bell gets off the mark with a single towards the covers off Johnson.

Rankin starts off after lunch and he bowls a half-volley outside off-stump. Rogers plays a cover drive and gets a four. Rogers then takes a single while playing a cut shot well wide on the off-side. Harris then smacks one up in the air and over wide mid-off for two runs. Borthwick bowls one short and Rogers tries to work it away on the leg side, but gets a leading edge straight back to the bowler, who takes a diving catch to his left. Peter Siddle gets off the mark with a single off a thick edge behind square-leg. Harris then thumps one through extra-cover for a four. Harris goes for the slog-sweep and Michael Carberry takes the catch, but falls over the boundary line and that is a six.

The next ball from Borthwick is a low full-toss and Harris reaches out well outside off-stump and hits it towards deep mid-wicket. He does not get enough on it and Carberry takes a good catch to his left. Nathan Lyon backs away to a delivery from Rankin and swings his bat at it. The ball goes high in the air and Stokes runs behind it from point. He does not judge the flight of the ball and it falls just away from him. Lyon gets two runs and he is off the mark. In Rankin’s next over, Siddle tries to swing at a shorter delivery, but edges it to Jonny Bairstow behind the wickets. That is the last wicket to fall for Australia. England need 448 runs to win the fifth Ashes 2013-14 Test.

Brad Haddin finishes the series with 493 runs at average of 61. The most runs scored by any player at number 7 or below in a test series

Stokes bowls one on a back of a length and Haddin moves away to the leg side and upper-cuts the ball over the gully region for a four. Stokes bowls a similar delivery and Haddin swats it away towards long-on for a four. Borthwick has finally been brought into the attack. He drops one short and Haddin pulls that wide of mid-on for a four. The next ball is a low full-toss outside off-stump. Haddin again goes for a slog, but he inside edges it onto the stumps. Mitchell Johnson is the next man in and he gives himself room and creams one through wide long-off for a four to get off the mark. Next ball, he walks across and gets bowled by Stokes. Ryan Harris gets off the mark with a single towards deep mid-off. Lunch is taken and Australia lead England by 419 runs.

Broad bowls a half-volley and Bailey drives that wide of mid-off for a four. Next ball, Broad bowls a bouncer and Bailey pulls it straight to Scott Borthwick at deep square-leg. There were doubts over his Test career. They might not have been answered over the course of the series. Boyd Rankin has been brought into the attack. Brad Haddin gets off the mark a single towards square-leg. The score has crossed the 200-run mark. Haddin is on the attack, but has not got the runs flowing as much as he would like.

Kevin Pietersen has been brought into the attack. He bowls from the wicket to Bailey and it is a maiden in his first over. Anderson bowls a full and wide delivery and Rogers drives through extra-cover for a four. Bailey seems to come down the track, but rocks back onto the back-foot and late cuts one from Pietersen to third-man for three runs. Pietersen drags one in short and Rogers plays it towards backward-point for two runs. Next ball, he plays the same shot, but gets a four towards third-man. Broad strays one on the pads and Bailey flicks it away for three runs through mid-wicket. Broad pitches one short and Rogers goes for the pull. He gloves it to fine-leg and runs three. Rogers cuts a short and wide one from Pietersen and gets a four to reach his century. That is his third Test century and all have come against England.

Stuart Broad begins proceedings on Day Three. Chris Rogers turns one away towards square-leg for a single and the first runs on the day. James Anderson then bowls a maiden to Rogers. Broad then bowls one full and George Bailey hits it down the ground for a four. Broad then bowls a yorker down the leg side and Bailey flicks it away for a four towards mid-wicket. That was also a no-ball. Anderson then bowls another maiden to Rogers. Ben Stokes comes into bowl. Bailey takes a quick single towards mid-off. Anderson gets a thick outside edge off Bailey’s bat, but the ball races away for a four through the third-man region. Rogers then cuts a short delivery from Stokes through gully for a four. Next ball, Stokes then bowls straight and Rogers hits it down the ground for another four.

No talk of a Whitewash please it’s Pink day at the SCG .. Great work by the @McGrathFdn #Ashes

Hello I am Shrikant Shankar and welcome to CricketCountry’s coverage of the Ashes 2013-14. Australia won the first four Tests and have taken a 4-0 lead in the five-match series. They are at 140 for four in the second innings at stumps on Day Two of the fifth Test. They lead England by 311 runs after bowling them out for 155 in their first innings. 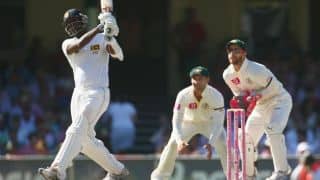 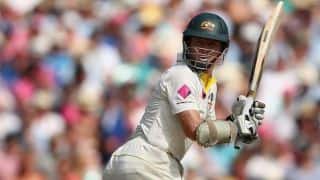