Faulkner played one from Chris Woakes to Ian Bell at point.

James Faulkner was dismissed for 35 in the fourth One-Day International (ODI) between Australia and England at Hobart. Faulkner was unable to end the match for Australia, playing one from Chris Woakes to Ian Bell at point. Earlier, Steven Smith scored his fourth fifty. Glenn Maxwell scored the ninth half-century of his career. Smith and Maxwell led an Australian recovery, taking the hosts from 92 for three to 161 for four before Maxwell holed out to Joe Root off the bowling of Moeen Ali, who took his second wicket.

Aaron Finch was bowled by Moeen Ali for 32, while Shaun Marsh and Cameron White were dismissed in the same over as Australia suddenly found themselves in trouble at 92 for three. White, who was on his ODI comeback, lasted only two balls before getting out LBW to Steven Finn, who had earlier dismissed Marsh for 45. James Faulkner came in at No. 6 for Australia. 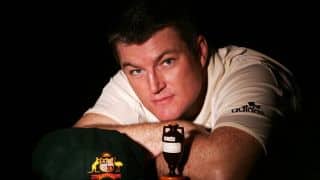