Australia vs India 2014: Michael Clarke could miss 1st Test if he is unable to start running by November 2

Marsh added that it is vital for Michael Clarke to play the opening Test against India from December 3.

Rod Marsh, chief selector of Australia expects the medical team to be careful over monitoring Michael Clarke as the World Cup draws near. Moreover, he could be on the verge of missing the first Test against India if he fails to start running by Wednesday, November 26.

Marsh said that he was unaware of any news on Clarke. He said that it was a kind of weird decision to ask a man to start running a day after he was dropped of the Sheffield Shield match on Tuesday due to a hamstring injury and ask him to play a tour match three days later against India, reports Sydney Morning Herald.

“They haven’t said too much. What they have said is that he needs to start running, and if he doesn’t start running by, I think, Wednesday then I think we can safely assume that he won’t be playing the Test match,” said Marsh.

Marsh added that it is vital for Michael Clarke to play the opening Test against India from December 3, but it would be difficult for him to feature after re-injuring his hamstring on November 14.

“I think that’s really important, because with his recent history we can’t have him breaking down in the first innings of a Test match … I think we all realise that,” he said.

“Given what’s coming up I think the medicos may go down that route – that’s their area. I wouldn’t be at all surprised [if that occurred],” he replied on being asked about the medical team who were monitoring Clarke closely.

However, it is still unclear if Clarke would be traveling to Adelaide from Sydney before the deadline on Wednesday to exert himself for the 1st Test according to Cricket Australia’s new policy. He has been already named in the probable 12 of the first game, however it is subject to his fitness.

“We’re not naming anyone just yet, and whether or not we have one that’s for us to know and you to find out – and I’m not telling you,” he said.

Talking about his replacement, the man who could fill in his spot could well be Philip Hughes, but he has been left unused in the Australian squad for the past couple of years. Although Marsh could consider him as a replacement for Clarke, but he feels that off late his performance in the Sheffield Shield has not been good enough to make it to the playing XI squad.

“He’s a hell of a good batsman. He probably just missed his window of opportunity. I wish he’d have got big runs [in the past two Sheffield Shield rounds],” said Marsh.

“He’s a very, very good young players that’s got 26, I think it is now, first-class hundreds. He’s probably as unlucky as anyone has been over the last little bit but his time will come, and he’ll be better for it in my opinion,” he added.

However, Marsh said that he was not concerned about the captaincy, but said that Shane Watson would continue to bat at no. 3. He also added that the inclusion of Mitchell Marsh as an extra pacer had taken pressure off Watson to bowl and is comfortable batting at no. 3.

“Not having been a great bowler myself I don’t know what it takes out of a person, as far as batting, but having been a wicketkeeper I would have been very hard, I think, to bat in the top three,” he said.

“In Test-match cricket you need to put your feet up after a day in the field if you’ve bowled, and I think Shane will bowl less with Mitch Marsh there, if they both play,” he added. 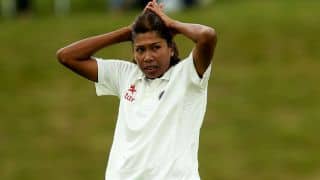