Australia vs India: Ravindra Jadeja Better Than Ben Stokes? Team India All-rounder Proves His Worth With Splendid Show Versus Australia in Sydney

Jadeja, who bowled only 3 overs on day one orchestrated India's return by picking up four-for his third-best figures in Test cricket away from home.

Steve Smith’s gutsy hundred was neutralised by Ravindra Jadeja’s four-wicket haul and a ‘rocket throw’ that caught the Australian batting star short of his crease on day 2 of the third Test in Sydney on Friday. After a disappointing opening day, Team India finally managed to get their act together on the second days as the visiting team staged a strong comeback to bowl out Australia for 338. Jadeja, who bowled only 3 overs on the first day, emerged as the standout performer from the touring party. He orchestrated India’s return by picking up a four-for for 62 runs his third-best figures in Test cricket away from home – with the ball.

The 32-year-old started off the day by providing India the much-needed breakthrough in form of Marnus Labuschagne. The latter missed out on a well-deserved hundred by nine runs as Jadeja struck. He later sent Aussie wicketkeeper Mattew Wade packing on 13, and followed it up by dismissing Pat Cummins and Nathan Lyon. Jadeja also picked up the wickets of Pat Cummins and Nathan Lyon to wrap hosts innings at SCG.

However, the ‘moment of the day’ or the ‘moment of the match’ – it’s debatable – came towards the fag end of Australian innings when Jadeja once again displayed his exemplary fielding skills with the run-out of Steve Smith. It as Jadeja’s split-second brilliance from square leg that put a full-stop to Smith’s 131-run knock. This also turned out to be Australia’s last wicket.

Here’s how the Twitter world reacted to Jadeja’s all-round show in Sydney:

Only #RAVINDRAJADEJA could have made the impossible, possible. Accuracy and sheer speed of the throw was the key to that run out. What a player!

Do you think Jadeja is one of the most versatile players we have at the moment?@imjadeja #jadeja #teamindia

In many ways, my moment of the match. Sensational from @imjadeja

Seemingly impossible that only Jadeja the fielder could have made possible. Not just the accuracy of the throw but the sheer speed of the throw was the key to that run out. Absolutely brilliant!

Since the start of 2016, Ravindra Jadeja has the best Strike Rate as a spinner away from home with the minimum of 40 wickets.

And for his next trick, Sir Jadeja will TURN WATER INTO WINE. #AUSvIND

Meanwhile, rookie opener Shubman Gill was the another star of the day as he struck a fluent half-century as a resolute India reached 96/2 after dismissing Australia for 338.

Apart from Jadeja – 4/62, the ever-dependable Jasprit Bumrah 2/66, were brilliant with their length on a flat SCG deck where Smith – 131 off 226 balls – along with Marnus Labuschagne – 91 off 196 balls – raised visions of a 450-plus total by taking the side to 206 for 2 at one stage. But in the end, 338 was all they managed in a little less than 106 overs with none of the other batsmen making any telling contribution.

What. A. Throw. All hail Sir Jadeja. Kya player hai yaar….will score runs in this Test too. #AusvInd

Then it was calm and collected Gill – 50 off 101 balls – who was assured during those cover drives off Nathan Lyon and equally breathtaking while presenting his forward defence to Pat Cummins.

The 21-year-old and Rohit Sharma – 26 off 77 balls – added 70 in 27 overs but more importantly set the stage for skipper Ajinkya Rahane – 5 batting – and Cheteshwar Pujara – 9 not out off 53 balls – to cash in on the batting-friendly conditions on the third day.

It was Gill’s maiden Test half century in just his second match. 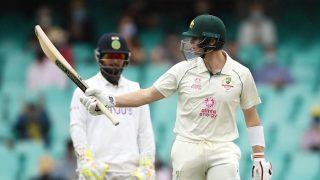 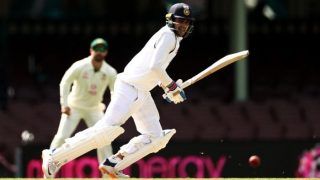 IND vs AUS | Shubman Gill Doesn’t Seem to Get Carried Away: Michael Hussey