Statistical highlights of the first day's play in the fourth and final cricket Test between India and Australia on Tuesday. 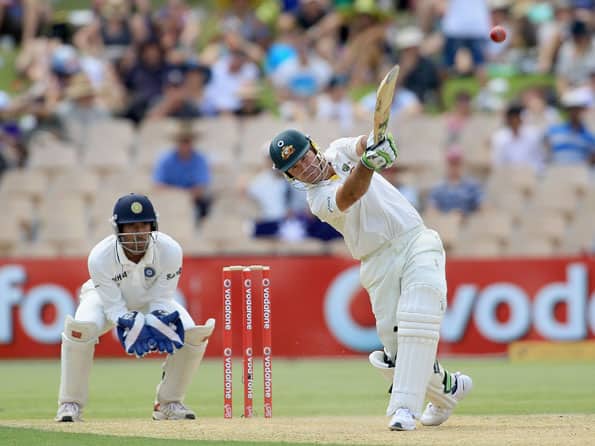 Ricky Ponting’s (R) feat of 23 hundreds on Australian soil is a record for most centuries at home, eclipsing the 22 each by Sachin Tendulkar and Jacques Kallis Getty Images

Statistical highlights of the first day’s play in the fourth and final cricket Test between India and Australia on Tuesday.

# Clarke’s aforesaid innings is his eleventh century in 41 Tests in Australia. He is averaging 58.46 in 63 innings in Australia, aggregating 3157 runs.

# In the course of his brilliant knock, Clarke has completed his 1,000 runs as an Australian skipper, aggregating 1105 at an average of 65.00 in 19 innings, including five hundreds and a fifty.

# Clarke, for the first time, has managed 500 runs in a Test series, aggregating 519 at an average of 173.00 in five innings, including a career-best, an unbeaten 329 at Sydney Cricket Ground.

# Ponting has become the second batsman to make 400 runs or more in the present rubber, aggregating 400 at an average of 100.00, including two hundreds and two fifties.

# Ponting has posted two hundreds in a Test rubber against India for the third time. He had first accomplished the feat in 1999-00 and then in the 2003-04 Test series.

# Since recording two hundreds in the 2006-07 series against England in Australia, Ponting has posted two hundreds for the first time in a Test series.

# Ponting’s feat of 23 hundreds in 89 Tests on Australian soil is a record for most centuries at home, eclipsing the 22 each by Tendulkar and Kallis.

# Ponting is the leading centurion at Adelaide (6), emulating his tally at SCG.

# Garry Sobers, Vivian Richards and Ponting jointly share a record for most hundreds (8) against India.

# With their invaluable 251-run unbroken partnership, Ponting and clarke have established an Australian record for the highest stand for any wicket against India at Adelaide, bettering the 239 between Ponting and Steve Waugh for the fifth wicket in 1999-2000.

# Clarke and Ponting have posted successive stands of 200-plus. The pair had shared a stand of 288 in the second Test at SCG.

# Australia have posted four partnerships of 200 or more in a Test series against India for the first time – two at SCG and one each at Perth and Adelaide.(PTI)

BCCI to prepare sporting wickets for Tests at home