Statistical highlights of the second day's play in the fourth and final cricket Test between India and Australia on Wednesday. 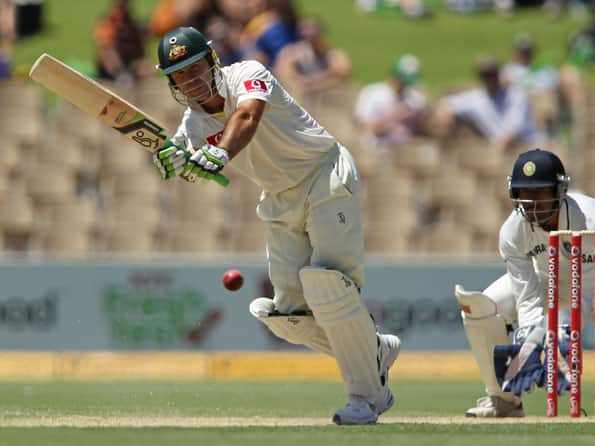 Statistical highlights of the second day’s play in the fourth and final cricket Test between India and Australia on Wednesday.

# Ricky Ponting’s magnificent 221 is his sixth double hundred in Tests. Only Don Bradman (12) has more double hundreds to his credit than Ponting for Australia.

# Ponting’s double hundred was the 19th at Adelaide – the most at one venue, eclipsing the 18 at The Oval.

# Clarke has become the first skipper to post two innings of 200-plus against India in Tests. Don Bradman, Graham Dowling, Graham Gooch, Greg Chappell, Carl Hooper, Clive Lloyd and Kumar Sangakkara have registered one innings of 200 or more each as captain against India.

# Dravid has been bowled in four consecutive innings for the first time – Sydney Test (second innings), twice at Perth and the Adelaide Test (first innings).

# Dravid has been clean bowled nine times in his last eleven innings, including six times in the present series. He now shares an Indian record for being bowled six times in a Test series with Chandu Sarwate, Anshuman Gaekwad and Bhagwat Chandrasekhar.

# Dravid took his tally of ‘bowled’ dismissals to 55, extending his record in Tests.

# Zaheer Khan has taken 14 wickets at 31.35 runs apiece in the current rubber – the most by an Indian bowler. Umesh Yadav (13 wickets at 40.61 runs apiece) has the next best wicket-aggregate for India.

# In seven Tests in Australia, Ishant has captured just ten wickets at an average of 78.20 – the strike rate being 131.1.

# Harris (35 not out) has posted his career-best innings in Tests, eclipsing the 23 against Sri Lanka at Galle last year.

# Clarke and Ponting were involved in a stand of 386 – the highest fourth-wicket partnership by any pair against India in Tests, surpassing the 288 by the same pair at Sydney in the second Test of the series, now-in-progress.

# The above stand is Australia’s second highest for the fourth wicket in Tests, next only to the 388 between Bill Ponsford and Don Bradman against England at Leeds in 1934.

The said partnership (386) is the highest for any wicket at Adelaide, eclipsing the 341 for the third wicket between Graeme Pollock and Eddie Barlow for South Africa against Australia in January 1964.

# The above stand is the highest for any wicket in Australia-India Tests, bettering the 376 for the fifth wicket between VVS Laxman and Rahul Dravid at Eden Gardens, Kolkata in 2000-01.

# The said partnership is the third highest for any wicket against India in Tests, next only to the 576 for the second wicket between Sanath Jayasuriya and Roshan Mahanama for Sri Lanka at Colombo (RPS) in 1997 and 451 for the third wicket between Javed Miandad and Mudassar Nazar for Pakistan at Hyderabad (Sind) in 1982-83.

# Clarke (210 off 275 balls) has posted his second double hundred in Tests – the highest is an unbeaten 329 off 468 balls at Sydney in the second Test of the present series.

# Clarke’s double hundred is the 20th by an Australian captain in Tests. Bradman had posted four, followed by three each by Bobby Simpson and Greg Chappell and two each by Ricky Ponting, Michael Clarke and Allan Border.

# Clarke and Bradman are the two skippers to post two innings of 200-plus for Australia in a Test series. Bradman had recorded two double hundreds against England in 1936-37 – 270 at Melbourne and 212 at Adelaide.

# Clarke became the second batsman to post two innings of 200 or more in a Test series against India. Ricky Ponting was the first to do so in the 2003-04 Test series in Australia – 257 at Melbourne and 242 at Adelaide.