Australia vs Ireland, only ODI: Aussies thrash Irish by 9 wickets

Australia vs Ireland, only ODI: Aussies thrash Irish by 9 wickets

Australia won the one-off ODI match by 9 wickets, against Ireland at Willowmoore Park, Benoni. It was an easy outing for the No. 1 team in the ICC ODI Rankings. First, the collective bowling effort and then a complete domination by the top order ensure they win the match with utmost ease. However, Ireland got off to decent start after captain William Porterfield opted to bat on belter of a track. The opening duo of Paul Stirling and Porterfield added 47 runs for the first wicket. Nonetheless, it was Stirling who took the bull by its horn, smashing 30 runs off 27 balls. His fiery innings was studded with 5 fours and a six.

The onus was then on Porterfield and John Anderson to continue the momentum. The captain, especially, batted with caution, not willing to give away his wicket. The plan, as a matter of fact, was to bat for 50 overs and score as many runs as they could. Meanwhile, Porterfield dealt in ones and twos coupled with a six and a four. But leg-spinner Adam Zampa trapped him lbw and sent him to the pavilion. The scorecard read 72 for 2 in 13 overs. Everything was in the right place for them. They were going at a right place as well.

All they had to do was keep the scoreboard ticking. Anderson did exactly the same. His first boundary was a lovely glance. Mitchell Marsh bowled too straight yet again. This time, Anderson leaned forward and crisply drive past the bowler. His foot work was immaculate. He seemed to have read the track very well. Live cricket scorecard: Australia vs Ireland, one-off ODI

Australia pulled back their length, trying to unsettle Anderson. However, given the touch he was in, he nicely pulled to vacant deep mid-wicket region. Then came a delightful chip over extra-cover. At the receiving end was the leg-spinner Adam Zampa. Anderson looked extremely comfortable against spin. He then swiftly swept to long-leg. Ireland were 120 for 2, looking good for a 250-plus score.

Just when things looked bright for the Irishmen, Boland provided the much-needed impetus. He trapped the rampaging Anderson in front on 39. To put things into perspective, he threw away a good start. The ball came onto the bat well. The outfield was lightening fast. In short, it was a batting paradise. Also read: Yuvraj Singh in line for ODI selection?

Then came the downfall. John Hastings and Adam Zampa did bulk of the damage. However, the experienced Kevin O’Brien tried to provide resurgence but could add only 23 runs to the scoreboard. Eventually, Ireland were bundled out for a paltry 198.

Australia had a flying start. They went all guns blazing, putting the opposition in a spot of bother. Warner, especially, made full use of the situation. He took Peter Chase to the cleaners. He bludgeoned through extra-cover, registering his first boundary. Chase bowled short and wide. Warner, given his brand of cricket, pounced on it and scythed it to third-man boundary. Another Chase over, another Warner dominance. Also read: Anurag Thakur lashes out at Sadeep Patil for comments over Sachin Tendulkar, MS Dhoni

Khawaja then joined the party. He drove one to the covers.

Another Irish bowler who fell prey to Australia’s belligerence was McCarthy. He was hit for a six and two fours in an over. The dynamics remained the same for the next few overs. Irish bowlers were reduced to pulp.

It seemed as if the match will be over in a matter of 25 overs. However, the rampant Warner was dismissed on 48. All the same, Khawaja added 126 runs for the second wicket, taking Australia to a comfortable 9-wicket win.

Australia will now lock horns with South Africa in a five-match ODI series. 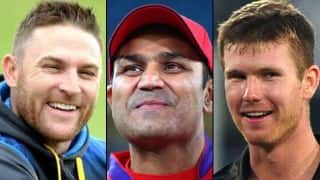