Australia edge out New Zealand by 75 runs in the first 50-over encounter of the Chappell-Hadlee Trophy 2016.

Australia edge out New Zealand by 68 runs in the first 50-over encounter of the Chappell-Hadlee Trophy 2016, at Sydney Cricket Ground (SCG). Australia captain Steven Smith was yet again in the thick of action, for he registered his highest individual score of 164 and that too at his home ground. In addition, he surpassed AB de Villiers’ 162, becoming the top-scorer at the venue. On the hand, New Zealand opener Martin Guptill scored a staggering 114, but it eventually came in a losing cause. The Trans-Tasmanian brothers will now face each other in the second ODI at Canberra, with Australia leading the series 1-0.

It was yet another dropping wicket, and Smith, without giving it a second thought, decided to bat first. Given the total Australia had put up, the gameplan panned out well. But the hosts encountered early blows, as Matt Henry clean bowled Aaron Finch for a golden duck. That did not hold back David Warner’s belligerence though. He bludgeoned as many as 4 boundaries to set the scoreboard on fire. However, debutant Lockie Ferguson uprooted Warner’s defence and broke the important partnership between the captain and his deputy.

New Zealand, nonetheless, made full use of the situation and scalped important wickets of George Bailey and Mitchell Marsh in quick succession.

All the same, captain Smith was still at the crease with the hard-hitter Travis Head. The track, so far, had offered enough assistance to the batters. But New Zealand’s discipline in the field kept them ahead in the race.

However, despite being four-down in 21 overs, Smith took the bull by its horn and played with a positive intent. On the other hand, Head dictated terms to the opposition bowlers by dealing in boundaries.

As fate would have it, Smith was lucky twice: once given not out when the ball was hitting the top of off and then a tough chance dropped by BJ Watling behind the wickets. All the same, that did not stop the star batsman from reaching the three-figure mark.

Meanwhile, Head reached his second half-century but was soon dismissed by Trent Boult for 52. For that matter, it was one of the highlights of the match, as Boult took a stunner diving forward off his own bowling.

Moving on, Mathew Wade later added 83 off 37 with Smith for the sixth wicket to take Australia to 324 for 8.

In reply, Jos Hazlewood knocked over Tom Latham in the very second over, making early inroads. But the big blow came when New Zealand’s go-to man Williamson was sent back to the pavilion.

New Zealand then had no option but to fire on all cylinders to match up to the required run-rate. Guptill and James Neesham did exactly the same, as the duo added 92 for the third wicket.

And just when New Zealand took the driver’s seat, Australia scalped the wickets of Neesham and Watling in quick succession. Again, that did not stop Guptill, for he showed magnificent show of character and scored his 12th century. He then stitched up a vital 50-run partnership with Colin Munro but perished while clearing the infield.

Munro went on a rampage to reach the target but failed to do so, as the wickets kept tumbling at the other end, eventually losing the match by 68 runs. 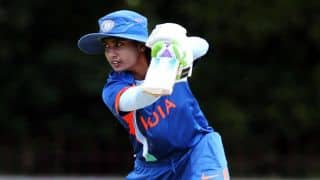