Australia will want to declare and put New Zealand into bat first thing in the morning.

Australia continued their dominance on day 3 as they bundled New Zealand for 317 in 82.2 overs. Australia started well picking up BJ Watling for a steady 32. Mitchell Johnson provided the first break through of the day. Kane Williamson was joined by Mark Craig who look good at the crease playing with ease.Nathan Lyon brought an end to Craig’s resilience innings of 23.Mitchell Starc with the new ball in his hand cleaned up Tim Southee and Trent Boult as New Zealand’s innings came to and end at 317. Australia with a first innings lead of 239 started off well with David Warner and Joe Burns blasting their way to 237 in just 38 overs. Warner completed his 14th century with Joe Burns getting his maiden Test ton hitting Craig for a huge six straight above the side screen as rains interrupted play. Australia suffered a mini collapse at the end of the play with Warner, Burns, Steven Smith and Mitchell Marsh getting out in a span of 4 overs. Mark Craig picked up three wickets with Australia well placed at 264/4 with a lead of 503 with Usman Khawaja and Adam Voges at crease on stumps at day 3 .LIVE SCORECARD: Australia vs New Zealand 2015, 1st Test at Brisbane

Earlier in day it was Kane Williamson who made batting looking easy scoring his 11th Test hundred eventually get out on 140 in a effort to avoid follow on for New Zealand. Watling(32) provided good support to Williamson to bring up their 50 run partnership for sixth wicket. Mitchell Starc was the best bowler for Australia picking up 4 for 57 runs with Mitchell Johnson picking 3.New Zealand went into bowling handicapped by the loss of Tim Southee who couldn’t take the field due to a back injury. For, Australia Warner and Burns put on a  200 run opening  stand their second 150+ partnership of the match . 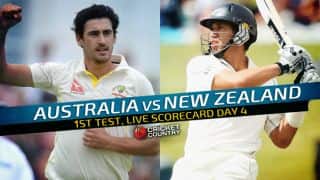