Catch the live streaming of Day 1 of the second Test between Australia and New Zealand on starsports.com and Hotstar.

Australia and New Zealand will take on each other in the second game of the ongoing three-match Test series at Perth on Friday. The Australians will want to win the the series in the coming five days after they dominated  New Zealand in the first Test and won by 208 runs at Brisbane. The third match will be historic and called forever as the first-ever day-night Test in cricketing history, and since the conditions or rather the nature of the pink ball under lights are ambiguous Australia will definitely will not want to risk their series victory by taking the Perth game casually. New Zealand on the other will want to put up more of a fight than in the first Test. Captain Brendon McCullum in the second innings showed that they can play aggressive brand of cricket be successful at it if everyone in the team stays positive. LIVE SCORECARD: Australia vs New Zealand 2015, 2nd Test at Perth

Catch the live streaming of Day 1  of the first Test between Australia and New Zealand on starsports.com and Hotstar, and the live telecast of the match on Star Sports 2 and Star Sports HD2.

Live streaming is a global concept that has spread like an epidemic worldwide. The ability to show live telecast of the match online is what is exactly termed as live streaming. The online streaming cane be viewed on various platforms, such as mobiles, tablets, laptop, etc. As the concept has gained immense popularity, the official broadcasters are starting to launch their own streaming online and the viewers must make sure that they must not login to the fake, illegal and malicious sites to stream as they could harm their gadgets or charge illegally. 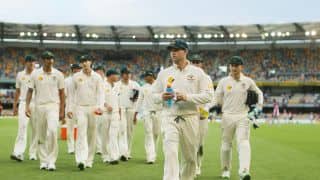