New Zealand won the toss and chose to bowl Tuesday in the second Chappell-Hadlee Trophy one-day international against Australia in Canberra. The Black Caps must win to keep alive their hopes of retaining the trophy after losing by 68 runs in Sydney on Sunday. New Zealand skipper Kane Williamson had a lucky start to his 100th ODI, as he won a crucial toss. Williamson in 99* ODIs has 3,886 runs at 46.26 with 8 centuries and 25 fittest along side his name. Williamson has skippered New Zealand in 26 matches so far, having a better batting average 49.26 with 1,113 runs in his kitty.

Australia made one change from that match with all-rounder James Faulkner in for leg-spinner Adam Zampa, while there was still no place for Glenn Maxwell. New Zealand brought back experienced paceman Tim Southee for Lockie Ferguson. Rain delayed the start briefly and there were cloudy skies as the covers were taken off and players were on the field in a niffy. David Warne r and Aaron Finch was out in the middle

But they won the final Test at Adelaide, which marked the beginning of a new era as they played with as many as three debutants. Carrying the momentum to ODIs, Australia won the first game convincingly to go 1-0 up. 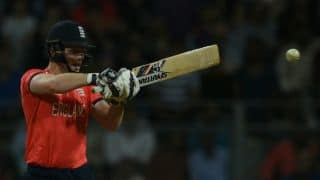