Dark clouds loomed over Canberra’s Manuka Oval this morning, eventually resulting in rain and then a 15-minute delay. Unlike in the first ODI of the Chappell-Hadlee Trophy, fortune favoured Kane Williamson at the toss. He chose to bowl first, expecting his pacers to exploit the conditions and move the ball around. Meanwhile, both teams made a change each: Tim Southee came in for Lockie Ferguson and James Faulkner for Adam Zampa. However, it was yet another featherbed for the batters, for Australian openers faced no enigma to keep the scorers busy. But New Zealand bowlers did what they are reputed for: punching well above their weight.

To put things into perspective, New Zealand dished out an age-old strategy. They bowled in the corridor of uncertainty, not letting the belligerent Australian openers free their arms. In reply, David Warner and Aaron Finch counterattacked with defensive cricket. They were being watchful instead. And as 10 overs were bowled, Williamson introduced spin to disrupt Australia’s rhythm. Mitchell Santner floated the ball, forcing the Warner-Finch duo to play a rash shot. But Warner is not the one to miss on loose deliveries. He scythed Santner’s short-of-length past short third-man. Australia, by all means, were in the driver’s seat.

Williamson persisted with Santner. This time, at the crease was Finch. So far, he did not look at his brutal best much like Warner. Nonetheless, unlike Warner, he has a reputation of losing his cool. And he did nothing different. To scale up the run-rate, he stretched his front leg and tried to sweep a ball that was tossed up on middle. In fact, Santner fooled him into playing a false stroke, as the ball missed everything and uprooted the stumps. New Zealand got the breakthrough they were longing for.

In came Steven Smith to join his deputy. A spin-pace duo was in operation: Santner and Tim Southee.

Santner had done his bit. Meanwhile, Southee had his task cut out: keep Smith at bay. For that matter, he did it with distinction. He bowled well away from Smith, with a packed off-side field. He did it time and again, and inhibited Smith from playing leg-side strokes something Stuart Broad did in Ashes 2015. The battle lasted for 12 balls, with Southee taking the cake. He gave away only 7 off 12, including a lucky four.

The tactic may not have produced a wicket, but it at least kept the in-form Smith quiet.

Well, that was just a quiet before a storm…

Captain and his deputy went on a rampage. Besides, Smith has already been in ominous touch. It was Warner who needed to emulate his genius.

The duo added 50 runs for the second wicket, then 100 runs and the runs kept coming at a thick rate.

Warner played down the ground, and Smith was seen taking the aerial route. Irony is, the one who goes aerial played with caution and vice versa.

Warner eventually reached his hundred and Smith his fifty. Another run-fest was being celebrated by the World No. 1.

Amidst all this, we saw a different-ball game (pun intended; you’ll know why).

Colin de Grandhomme’s delivery hurt Smith where it hurts the most, leaving him in a blinding pain. Come to think of it, a batsman gets hit on the head and he gets all the attention. A batsman gets hit in the balls and he is laughed at. People who have played cricket at any level can share the pain. Meanwhile, Smith was down, with Warner having a mischievous smile on his face.

However, Warner and Smith were dismissed in quick succession, with Australia at 248 for 3 after 39.1 overs.

Travis Head continued his dominance, scoring his consecutive fifty off 29. The platform, in all honesty, was already set for him to go all guns blazing. And at the other end was Mitchell Marsh. Of course, New Zealand were in a spot of bother.

Warner in a mid-match interview said they were looking for over 360. Judging by the way Mitchell Marsh middling the ball, it was not that tough a task. He reached his fifty off 33, sending 3 consecutives deliveries soaring over the boundary line, in the ultimate over, to register second-highest total at Manuka Oval. 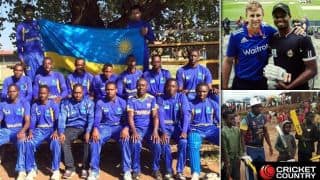 Meet Eric Dusingizimana: The Engineer who is building future of Cricket in Rwanda 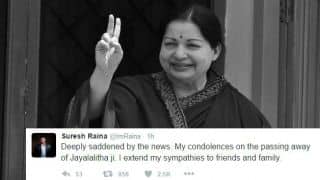