MCG will produce a track which will give a fair contest between bat and ball and one can expect a huge turnout for the big final.

“A brief look at the strengths and weaknesses of each team, along with a summary of the external factors, shows us just how close this final could potentially be.” Smith said that the final is expected to be a cracker of a game. “It’s all set to be a cracker of a game but with the history of World Cup finals being relatively one-sided, I’m hoping this match bucks the trend,” he said. READ: New Zealand dream of toppling Australia in ICC Cricket World Cup 2015 final

Speaking about the Melbourne Cricket Ground (MCG), the 34-year-old said the venue will produce a track which will give a fair contest between bat and ball and one can expect a huge turnout for the big final. Australia vs New Zealand 2015 World Cup final: Indian cricket fans to support Blackcaps

“Australia love playing at the MCG with their last loss here coming against Sri Lanka back in March 2012. It produces tracks which give a fair contest between bat and ball,” he said. “The ground has already played host to four innings in excess of 300 [runs] in the four games at the venue during the tournament. It would be a fitting end if we could raise that figure. But what is certain, is the huge crowd one can expect on Sunday.”

The left-handed batsman said that the toss won’t be a big factor in the game, but on winning it one should bat first and look to put runs on the board. “Although losing the toss is not the end of the world, I would expect the winning captain to elect to bat first. Putting runs on the board in a pressurised environment cannot be underestimated,” he said.

“Giving your bowlers a decent total to defend gives them the confidence to go out there and execute their skills accurately.” Smith pointed out that Australia skipper Michael Clarke’s tactics will need to be spot on when they take the field. “Containing and dismissing Brendon McCullum at the beginning of the innings, should be the main objective. Should McCullum get going, he has the ability to take a game away from an opponent in less than 10 overs,” Smith concluded. 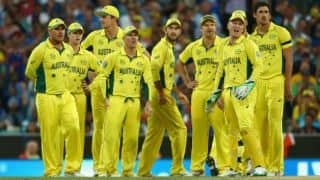