Australia captain Steven Smith has been ruled out of the upcoming New Zealand tour after injuring his ankle in the fifth One-Day International (ODI) against Pakistan.

Australia captain Steven Smith has been ruled out of the upcoming New Zealand tour after injuring his ankle in the fifth One-Day International (ODI) against Pakistan, Cricket Australia (CA) said Friday. Smith was fielding in the match at the Adelaide Oval on Thursday when he injured his left ankle, CA said. “He came off the field and had his ankle strapped and was able to return to the field for the remainder of the match,” sports science and sports medicine manager Alex Kountouris said in a statement. “Following further assessment this morning we believe Steve has sustained a medial ligament injury to his ankle. He will return to Sydney today to undergo scans to confirm the diagnosis. Early indications suggest this will likely take seven to 10 days to recover, meaning Steve will be unable to (participate) in the Qantas Tour of New Zealand.”

The New Zealand ODI tour was due to start on Monday. Cricket Australia said a replacement for Smith would be chosen by the national selection panel later Friday. The setback came less than a month before the tough India tour. “We’ve got a lot coming up so they think it’s an opportunity to rest it and be right for India,” Smith told reporters in Adelaide, cricket.com.au reported. “It’s a bit of a shock. I just landed really awkwardly on my foot and I felt something straight away. I’m confident I’ll be fine to train in Dubai after that and for the first Test in India.”

The first Test against top-ranked India begins in Pune on February 23. 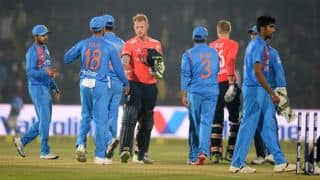