Defending just 213, Australia had recovered well after losing Finch early, Riaz came in and dismissed David Warner in his very first over.

Defending just 213, Australia had recovered well after losing Finch early, Riaz came in and dismissed David Warner in his very first over. He had Michael Clarke caught at short leg and suddenly had come alive. He ran in full throttle and bowled his heart out spearing in quick bouncers at Shane Watson. He followed through and cheered his team on. He was really pumped up. Getting edgy, Watson hooked one straight to Rahat Ali at fine leg who dropped a sitter. Wahab could not believe his luck. He still kept running in hard every ball but the ball just evaded the fielders. He had figures of 6-0-24-2. Full Scorecard: Australia vs Pakistan, ICC Cricket World Cup 2015 quarter-final

Watson and Smith then were taking Australia home before Smith was trapped in front. Wahab returned for a spell. Australia still needed more 60 runs when Maxwell played his walking cut and ball flew down to third man. Sohail Khan ran in, got two hands to it but could not catch the ball. Riaz still kept running in and did not give up. With the asking run rate never in question, Glenn Maxwell opened up and both he and Watson got stuck into him hitting him all over the park. In what turned out to be his final over of the game, Watson, the same man who was dropped off his bowling, was now on 50, Australia needed just 21 more and Watson pulled him for a maximum following with a tickle to the ropes for a boundary. But even that did not stop Riaz, he hurled in a quick bouncer last ball and followed through to let his feelings known to Watson. Top 10 batsmen in ICC Cricket World Cup 2015

Pakistan ended up on the losing side but Riaz knew had he been supported by his fielders a bit more, the game could have been different. The tears after the game were proof of the effort he put in today but that was all he could do today. Top 10 bowlers in ICC Cricket World Cup 2015

Tears in Wahab’s eyes. The only guy who turned up for Pakistan today. No one else did pic.twitter.com/yKc3brf1vz 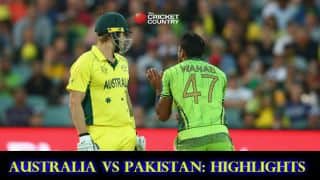