The second session is expected to be more exciting as one of the remaining batsmen will have to raise their hands and stitch a long partnership for Australia to get a effective lead.

On Day Two, first session, of the first Test between Australia and South Africa, Proteas pulled back things a bit with four crucial scalps heading for lunch break. After South Africa posted a modest score of 242 in their first innings on opening day, Australia reached 105 for no loss at stumps on Day One. Trailing by 137 runs, Australia were expected to tighten the screws further on their opposition but like yesterday, South Africa showed character to take four wickets by end of session. David Warner was the first batsman to get dismissed after which Australia also lost their skipper, Steven Smith. Well set opener, Shaun Marsh, departed just before the stroke of lunch for the score of 63. The match is now evenly poised as South Africa are not yet on top but have also not let Australia run over with a big score. LIVE CRICKET SCORECARD: Australia vs South Africa, 1st Test at WACA, Perth

The session had a lot of excitement as Australian openers raced to 158 for no loss with Warner carrying on his attacking mode. Warner was well set on 97 but against the run of play, edged one delivery off Dale Steyn to give a sharp catch to Hashim Amla at slips. After his blow, Australia had a mini collapse as they lost Usman Khawaja and Smith in quick succession. Smith was out off Keshav Maharaj’s ball as he moved forward to flick one to the square-leg but missed the length of the ball and was adjudged lbw. The decision went upstairs and took a lot of time but finally went in South Africa’s favour. Smith had moved a long way at the crease which sparked doubts in the minds of commentators but eventually had to depart for 0.

After his dismissal, South Africa were beaming in confidence but lost Steyn due to a shoulder injury. Reports suggests that he will be taken to the hospital which may give a big dent to visitors’ chances. Marsh was expected to steady Australia’s sinking ship and he held his end for sometime along with Adam Voges but departed just before the break. Four crucial wickets have definitely given South Africa lots to cheer about but Steyn’s injury is a big setback for them. Talking about the match, the session has brought the game in balance as neither South Africa have a big total to defend nor Australia have much experience in their remaining batting line-up to churn out a big lead. ALSO READ: de Kock on verge of registering mark among modern-day greats

Earlier in the match, on Day One, Australia kept on getting regular breakthroughs with South Africa getting off to a precarious start. From 32 for 4 and 81 for 5, South Africa managed to get 242 courtesy Quinton de Kock. The wicketkeeper-batsman smacked 11 boundaries and a six to score 84 off 101 balls, pushing a mediocre South African score into a respectable one. When South Africa played and won at WACA in Perth the last time in 2012, they were bowled out for 225, but still managed a massive 309-run victory. The tourists will certainly keep this in mind till the result of the match comes out.

De Kock added 71 runs with Temba Bavuma for the sixth wicket, but South Africa will rue missing out on the opportunity of putting up a big score on a wicket which was made to look like a batting-friendly deck by Warner, later on the day. The left-handed opening batsman struck 13 boundaries and 1 six to remain unbeaten on 73, which came off just 62 balls. Warner s innings was studded with strokes which were both confident and risky, but at the same time, South African bowlers failed to beat the bat on a regular basis.

The left-handed Marsh, who is coming off two impressive centuries in Sri Lanka as well as in the Sheffield Shield, did not look dominating but he remained there till the end on Day One which tilted the proceedings in hosts’ favour. There was no showing with the bat for Proteas apart from de Kock, Bavuma and skipper, Faf du Plessis, for 37.

However, in Day Two’s first session’s play, South Africa have again showed the will to stay in the hunt by bagging regular scalps. Vernon Philander, Maharaj, Steyn, Kagiso Rabada all picked up one wicket each with du Plessis rotating his bowlers well. The second session is expected to be more exciting as one of the remaining batsmen will have to raise their hands and stitch a long partnership for Australia to get a effective lead. 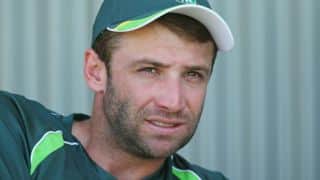 Phillip Hughes' death has nothing to do with sledging, says NSW coroner Michael Barnes