The match is firmly in South Africa s grip as Australia will have to face the heat in a big chase. However, with still plenty of runs in store on the surface and Proteas without Dale Steyn it could very well turn-out to be a cracker of a game.

Visitors South Africa have set the tone of the opening Test versus Australia at Perth with a remarkable fight back. If South Africa managed to post 242 on Day One, Day Two saw their resurgence with the ball dismissing Australia for 244. They were not done yet as by end of Day Three, they are 390 for 6, with the lead standing at 388 runs. JP Duminy and Dean Elgar continued from where they had left on second day s play as both added centuries to their name and stitched over 250 runs together to take Proteas to a solid position. Australia bowled their hearts out, remained patient and were rewarded later in the day but were still outdone by visitors cautious batting. Hosts have a big task in hand as they are set to chase a big score while Faf du Plessis side are on a roll and will like to push closer to a win on Day Four. LIVE CRICKET SCORECARD: Australia vs South Africa, 1st Test at WACA, Perth

On Day Three, South Africa resumed batting at 104 for 2, eyeing a big lead against a quality bowling line-up. Elgar and Duminy were both at the crease and understood their responsibilities of batting with patience. The duo gradually built the first big partnership of the innings for the visitors. Earlier, the team had lost the wickets of opener Stephen Cook and No. 3 Hashim Amla in last session of previous day. Elgar got to his 50 off 130 deliveries while Duminy brought up his 50 off 90 deliveries. At lunch, the partnership looked strong, having added more than 100 runs and batting comfortably. South Africa s lead surged to 181 runs by that time.

Resuming from the first break, Elgar and Duminy took the partnership forward. Duminy got to his fifth Test century while his last came in 2014. The player looked confident playing his strokes. Elgar got to his fifth Test century as well soon after Duminy. Though the batsman looked nervous approaching the milestone, he played a very crucial knock, playing the perfect partner to Duminy and helped his team get to a comfortable position.

Just before tea, South Africa lost Duminy for 141 as he edged one behind off Peter Siddle. Siddle got Duminy for extra bounce as the batsman tried to drive the ball but edged it to wicketkeeper Peter Nevill. Skipper du Plessis joined Elgar but the centurion departed for 127 flashing one at gully region off Josh Hazlewood. ALSO READ: Ricky Ponting: Glenn McGrath was difficult to be captained

There was a mini collapse for South Africa with Temba Bavuma and du Plessis departing before end of day s play but a brief partnership between Quinton de Kock and Vernon Philander ensured South Africa ended on a high. The ploy for South Africa on Day Four will be simple. They will like to bat for majority of the first session and give a daunting ask to Australia in the fourth innings. South Africa struggled on Day One but still managed to post a mediocre score but their bowlers turned things around remarkably to tilt the match in their end. Proteas bowlers were pitching the balls in right areas, showed courage and will to stay in the game. They were rotated well by du Plessis and as a result everyone contributed. Vernon Philander took four scalps while debutant, Keshav Maharaj, chipped in with three wickets.

The match is firmly in South Africa s grip as Australia will have to face the heat in a big chase. However, with still plenty of runs in store on the surface and Proteas without Dale Steyn, ruled out due to shoulder injury, Australia will like to counter attack and spring a surprise at South Africa. 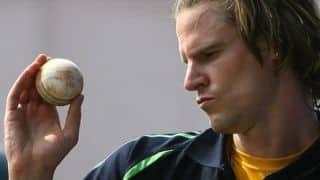