Visitors South Africa post an emphatic victory against Australia as they win the series opener. Playing at the Western Australia Cricket Association (WACA) ground at Perth, South Africa elected to bat first after winning the toss. Their performance with the bat in the first innings remained disappointing as they got all out for 242. The team made a brilliant comeback with the ball as they restricted a steady-going Australia for 244, handing them a 2-run lead. The following innings, Proteas’ batting was exceptional as they piled on 540 runs before declaring the innings and bowled equally well to end things for Australia with a margin of 177 runs. FULL CRICKET SCORECARD: Australia vs South Africa, 1st Test at Perth

Stephen Cook started off a disastrous innings for South Africa, getting out for a duck in the very first over. Landslide of wickets continued, with Hashim Amla departing for a duck a couple of overs later. South Africa hardly got any support from the top, with Dean Elgar and JP Duminy also getting out for individual scores less than 20 runs. It was not until skipper Faf du Plessis came out to bat that the innings got a partnership. Du Plessis scored 37 runs but they were crucial looking at the fact that he stayed at the crease for long and stopped the regular fall of wickets.

The most crucial first innings partnership for South Africa took its shape as Quinton de Kock teamed up with Temba Bavuma. The duo played just as was expected of them. Bavuma scored the innings’ first half-century and de Kock soon completed his. Bavuma was dismissed for 51 while de Kock took his innings to 84. With some more contributions from the lower-order, the visitors ended their innings with 242 runs on the board. FULL CRICKET UPDATES: Australia vs South Africa, 1st Test at Perth

Mitchell Starc and Josh Hazlewood were the two bowlers from Australia to have run through the South Africa batting line-up. The two worked their way with the usual extra bounce that Perth pitch had on offer and got their wickets. Starc bagged 4 wickets in the innings, Hazlewood got 3, Nathan Lyon bagged a couple while Peter Siddle picked up 1 wicket.

Australia had a very good start to their batting. David Warner and Shaun Marsh built up a strong opening partnership and at the end of Day One, Australia were 105 without any loss. But Day Two belonged to South Africa entirely. Dale Steyn removed Warner for 97 and his mates kept picking up wickets regularly post that. Australia, who were 158 without any loss at one point, got bowled out for 244.

Dale Steyn’s discomfort in the shoulder which was operated recently led him out of the match and series. Despite his absence, the bowlers did not disappoint. Kagiso Rabada’s spell was a special with very disciplined line and a bit of movement. Rabada took 2 wickets while Philander’s 4 wickets were crucial. A surprise package was that of Keshav Maharaj. He had stolen the limelight earlier, hitting Starc for a six and made his debut special with 3 wickets.

South Africa again had an unstable start, with Cook departing for 12 and Amla following him for 1. Elgar and Duminy were the next two in and knew their responsibility well. The two remained unbeaten at the end of Day Two as South Africa posted 104 for 2 at stumps. Elgar and Duminy built on their partnership bigger the next day, scoring their individual half-centuries and eventually centuries. It was the fifth Test century for both the players; Duminy got out for 141 while Elgar contributed with 127. They against lost some quick wickets until de Kock and Philander built up a successful partnership down the order. It was the second biggest partnership of the innings after the 250-run partnership between Elgar and Duminy.

De Kock scored 64 runs while Philander went on to build yet another partnership with Keshav Maharaj. Maharaj hit three big sixes and played a quickfire innings of 41 runs off 34 balls and remained not out as du Plessis declared South Africa’s innings for 540 for 8, with a lead of 538 runs.

Australia bowlers failed to produce much movement. The Perth pitch had started getting cracks and bowling in right areas could have been fruitful, which was seen later during South Africa’s bowling. Hazlewood, Siddle and Mitchell Marsh picked up 2 wickets each while Starc and Smith picked up one wicket each.

Shaun Marsh and Warner, who were expected to replicate their previous performance. Bavuma pulled off a stunning run out to dismiss Warner for 35. The fielder did a Jonty Rhodes, throwing the ball at the non-striker’s middle-stump while hanging in the air and it initiated further dismissals. Shaun Marsh departed soon after for 15. Usman Khawaja was the one to hold the innings together while crucial players like Steven Smith, Adam Voges and Mitchell Marsh failed to perform up to the mark. It was Peter Nevill, who scored the next half-century after Khawaja, who got out for 97. Nevill spent some time at the crease showing some good footwork while wickets kept falling at the other end. Neville remained unbeaten till the end as Maharaj got the final wicket of the match, dismissing Nathan Lyon for 8 and handing their side a 177-run victory.

South Africa’s bowling in the final innings was exceptional. Rabada bowled a fine spell bagging a 5-for and produced a lot of movement. The bowlers got reverse swing and the Australia batsmen failed to read the balls. Philander, Duminy, Maharaj and Bavuma all picked up one wicket each. 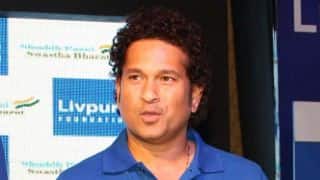