Australia have set South Africa a target if 330.

Hashim Amla was bowled for 102 in the third One-Day International against Australia at the Manuka Oval on Wednesday.The Aussies have fought back with two quick wickets.

Earlier Aaron Finch’s 109 propelled Australia to a huge score of 329 in the third One-Day International against South Africa at the Manuka Oval on Wednesday. The highlight of his innings was the manner in which he paced himself, he always was in control.

The 28 year-old took his time early but came into his own afterwards as his innings was studded with nine fours and three sixes.  He was content to play second fiddle to David Warner in the opening stages of the Australian innings but soon he took the attack to the bowlers. A pull shot off Vernon Philander in the sixth over was one stroke that stood out.
Steve Smith too contributed with a fantastic 73 not out off only 55 balls. He took the South African bowlers to the cleaners toward the end of the innings. Earlier Australia’s openers Aaron Finch and David Warner gave them a solid start as they put on 118 in 19 overs. Vernon Philander broke the opening stand when he had Warner caught by AB de Villiers for 53. Finch too made a half-century. The South African bowling attack lacked discipline as they constantly bowled loose balls and conceded quite a few extras especially free hits. 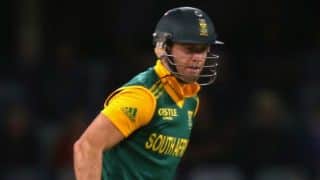