South Africa suffered early blows in form of Quinton de Kock and Hashim Amla, as they reached 22/2 after seven overs in their second One-Day International (ODI) versus Australia at the Western Australia Cricket Association (WACA) Ground in Perth on Sunday.

De Kock was dismissed by Josh Hazlewood in the second over, whereas Amla was the second man  to be dismissed by Australia bowler Mitchell Johnson for 10. South Africa need another 132 runs to win.

Morne Morkel claimed five wickets to help South Africa bowl out Australia for a paltry total of 154 in 41.1 0vers. Mitchell Marsh‘s half-century was the only bright spot for the hosts as they suffered a batting collapse against a disciplined South African pace attack led by Morkel. Marsh smashed three fours and two sixes to score a fighting 67 off 88 balls.

Morkel registered his only second five-wicket haul in ODIs, and also his best bowling figures in the format. He looked in perfect rhythm Morkel returned with the figures of 8-0-21-5. South Africa’s star speedster Dale Steyn too had success, as he snared the wickets of Marsh, Aaron Finch and Nathan Coulter-Nile. 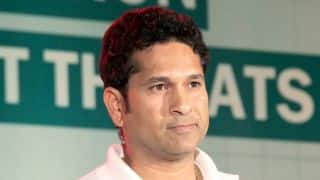 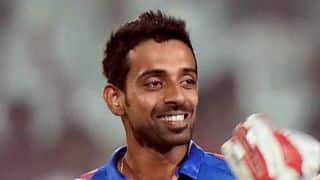