Australia defeated South Africa by seven wickets  in  the second T20 international on Friday at Melbourne. They made a terrific comeback after their defeat in the first T2o international at Adelaide on Wednesday.

The Aussies needed only 102 to win which they chased down in 12.4 overs. Captain Aaron Finch was particularly aggressive as he made 44 not out. With a paltry score of 102 to defend the Proteas needed to get early wickets but they failed to do so.

Ben Dunk started off proceedings during Australia’s chase with a couple of boundaries in the second over. He, however, fell for 15. Thereafter Finch took over as he went after pacer Kyle Abbot.

The introduction of Imran Tahir did not bring about a change as Finch started to attack him. Watson too was as aggressive as can be. He was very severe on medium pacer Ryan McLaren who he hit for four boundaries in one over.

Once the Aussie batsmen got off to a brilliant start there was no stopping them. The South African bowlers simply went through the motions. Finch will be particularly plesed with this victory as this is his first as T20 captain at home.

Earlier South Africa somehow made 101 for 7 against Australia. The Aussie bowlers put in a fantastic performance. They never allowed the Proteas to dominate. From the moment Quinton de Kock was out for zero in the first over the Aussie bowlers never looked back.

Rilee Rossouw was then caught and bowled by James Faulkner for 12. He briefly threatened to score heavily again as he did on Wednedsay but could only manage 12 this time. For the South Africans it was their skipper JP Duminy who tried his best to keep the Aussie bowlers  as he made 49 off 50 balls. Cameron Boyce was simply phenomenal as he conceded only 15 runs in four overs.

He took two wickets as well. The manner in which he lured and then had Reeza Hendricks and Farhan Behardien stumped was nothing short of special. The Aussies always had the Proteas on the mat. At no stage did they let the South Afrucan batsmen get away. Even a destructive player like David Miller found the going tough as he could only manage five.

The Aussie pacers were also nothing short of fantastic. Bollinger started off proceedings by removing de Kock in the first over. Even Pat Cummins bowled with a lot of fire and generated a lot of bounce.

Man of the Match: Cameron Boyce 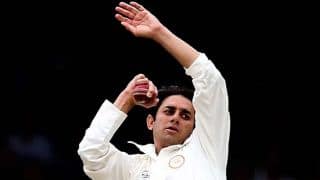