(Australia need to win the match in order to confirm their berth in the final. Catch the live updates of the match here)

South Africa 220 | Overs 44
Aaron Phangiso 3 (9)
Maxwell to Imran Tahir, OUT, it’s all over, Tahir has been caught at deep cover and Australia enter the finals of the tri-series with a bonus-point win. He freed his arms and lofted to ball over cover but only got as far as Mitchell Marsh, who had a great day. A comprehensive win for the Aussies.
Imran Tahir c Marsh b Maxwell 2 (4)
South Africa 217/9 | Overs 42.4
Aaron Phangiso 2 (5)
Johnson to Morkel, OUT!!, that’s gone through, bowled’im! What a difference pace can make! the length delivery came in from just outside off and it didn’t give Morkel any time to move his feet, he tried to drive it down but missed it completely.
M Morkel b Johnson 0 (2)

South Africa 214/8 | Overs 41.5
Aaron Phangiso 1 (2)
OUT!! Faf is gone. Oh, he’s hitwicket, what a way for that innings to end! Faf went back in the crease to turn the ball to deep midwicket from outside off and set off for a single too, but his right heel touched the base of the off stump and he has to walk back. He has a word with Phangiso before leaving the field. Final nail in the coffin for South Africa.
F du Plessis hit wicket b Richardson 126 (109)
South Africa 206/7 | Overs 40.3
Faf du Plessis 120 (103)
Out!! Dale Steyn run out. Australians are now clearly on top. Steyn punched the ball down to mid-off and took off to give strike to Faf, but the ball reached Smith in no time and he struck the stumps with a direct hit and so much power that one of them broke!
OUT!! Dale Steyn run out 5 (10)

Faf du Plessis has become first South African to score back to back centuries against Australia in ODIs. #SAvAus

South Africa 102/5 | Overs 25
Ryan McLaren 0 (1), Faf du Plessis 51 (60)
Mitchell Johnson cleans up David Miller! That’s a classic fast bowlers dismissal! Du Plessis has got his half century though, and 100 is up for the Saffers! The required run rate has gone up to more than seven runs per over now though.
OUT! David Miller b Johnson 3 (5)
South Africa 93/4 | Overs 23
David Miller 0 (0), Faf du Plessis 47 (54)
And Duminy is gone! Australia well and truly ahead. Marsh takes the wicket again. David Miller in for South Africa.
OUT! JP Duminy c (sub) Cutting b Marsh 16 (32)
South Africa 83/3 | Overs 21
JP Duminy 10 (24), Faf du Plessis 44 (50)
South Africa can’t afford to let their scoring rate drop, but can’t afford to lose wickets playing rash shots either. Duminy and Du Plessis have a difficult task on their hands right now.
South Africa 72/3 | Overs 19
JP Duminy 5 (15), Faf du Plessis 38 (47)
Faf du Plessis is slowly piling on the runs. South Africa face a uphill task from here. Australia cannot afford to take it easy, and need a few more wickets to really put themselves in advantage.
South Africa 64/3 | Overs 15
Faf Du Plessis 34(41)
AND LYON STRIKES! Huge, huge wicket here. AB de Villiers out for just six, he swept that one really hard but it was taken brilliantly at square leg.
OUT! AB de Villiers 6(19) c Bailey b Lyon
South Africa 36/2 | Overs 10
AB de Villiers 0 (3), Faf Du Plessis 13 (24)
Mitchell Marsh who shone with the bat, now has been given a chance to shine with the ball. And he strikes second ball! Amla departs.
OUT! Hashim Amla c Haddin b Marsh 17 (28)
South Africa 29/1 | Overs 7
Hashim Amla 16 (20), Faf Du Plessis 7 (17)
Amla and Du Plessis have kept the scoreboard ticking after the early dismissal.
South Africa 16/1 | Overs 3
Hashim Amla 6 (7), Faf Du Plessis 4 (6)
Quinton de Kock falls in just the second over. Glenn Maxwell of all people makes the breakthrough. This is good captaincy from Bailey. Australia have made just the start they needed.
OUT! Quinton de Kock c c Smith b Maxwell 1 (5)

Here is a little incident to cheer you up.

James Faulkner and Ben Cutting have been dropped, while Mitchell Johnson, Steven Smith and Kane Richardson will make a comeback.

AB de Villiers makes a comeback, while Rilee Russouw has been dropped.

Hello and welcome to CricketCountry’s live blog of the Zimbabwe Triangular Series 2014 Match 5 between Australia and South Africa at the Harare Sports Club in Harare on Tuesday. This is Sameer Jha, and I will be bringing you the updates of the match. Click here to read PREVIEW of the Australia-South Africa clash.

According to AFP, Australia must overcome the embarrassment of losing to Zimbabwe and the departure of captain Michael Clarke to injury when they take on South Africa in the fifth match of the ongoing One-Day International (ODI) Triangular series on Tuesday.

Clarke s hamstring problem flared up during his innings of 68 against Zimbabwe on Sunday, and insult was added to injury when the hosts chased down a target of 210 to pull off one of the great upsets in cricket s history.

Clarke flew out of Zimbabwe on Monday to return home for treatment, leaving Australia with a squad of just 13 to pick from for Tuesday s encounter. The three-wicket defeat to Zimbabwe saw Australia slip from No. 1 to No. 3 on the ICC s one-day rankings table, below India and South Africa. It was just the second time ever that Australia had lost to the No. 10-ranked nation, following Zimbabwe s win at Trent Bridge in the 1983 World Cup. 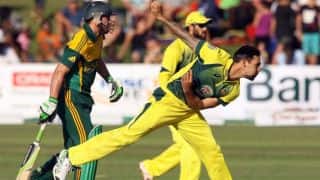