Following their 0-3 humiliation in Sri Lanka, Australia made a horrible start to the summer at home by losing the first Test of their three-match series against South Africa by a huge margin.

Former cricketer and national selector, Mark Waugh has listed out his concerns for the current Australian Test side, which has now lost 4 Tests on the trot. Following their 0-3 humiliation in Sri Lanka, Australia made a horrible start to the summer at home by losing the first Test of their three-match series against South Africa by a huge margin. Despite restricting South Africa to a modest total and making an extremely strong start, Australia suffered an embarrassing batting collapse and ended up losing the first Test at WACA, Perth, by a huge margin of 177 runs. Australia s defeat at Perth was their first in the opening Test of their summer at home in 28 years. Full Cricket Scorecard: Australia vs South Africa, 2nd Test at Hobart

Waugh told Fox Sports‘ Inside Cricket program, “The facts are it was disappointing. I mean, we shouldn’t lose from that position, really. We’ve seen it happen probably three or four times in the last five Test matches where we’ve dominated day one, we’ve been ahead in the game and then I don’t know whether it’s a subconscious thing where we relax a bit. But South Africa played great. Full credit to them. But if our boys look at their performances, they’ll know they can do a lot better than that.”

The former batsman said that the Australian cricketers failed to convert start into big scores, and also could not get enough partnerships in the middle. “It was a combination of some good bowling and some poor execution with the bat; poor decision making,” he said.

“I think it’s a bit of a mental thing now, possibly. We’ve had it happen to us probably three or four times in recent times in Sri Lanka. We go back to England, that was a while ago. So it’s probably both technical and mental … so you can’t do much about it. It’s up to the individual. They’ve got to work on their game and how to best to adapt to the conditions. We’re not probably adapting to what we’re seeing in front of us with the bat, he added. ALSO READ: Warne expresses desire to coach AUS for T20I series against SL

Waugh raised concerns over the priorities for the batsmen, saying, Maybe we’re thinking about something else, but they’re not concentrating on that ball and what to do if the ball’s reversing or a left-arm spinner’s bowling. You’ve got to have your plans in if it’s that sort of bowling. At the moment it looks like we’re batting and hoping a little bit.”

He continued, “These guys are talented enough and, if you look at them individually, they’ve all make runs at different times. But as a unit we’re just not getting partnerships after the first one, really. We’re just losing wickets in blocks and having two new batsmen at the crease, which is always tough in Test match cricket.” 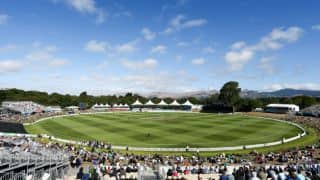