Mitchell Johnson has labelled the DRS as a `failure` after all-rounder Mitchell Marsh s controversial leg before dismissal during 1st Test against South Africa.

Melbourne: Former Australian paceman Mitchell Johnson has labelled the Decision Review System (DRS) as a `failure` after all-rounder Mitchell Marsh s controversial leg before dismissal during the opening Test of the three-match series against South Africa at the WACA Ground in Perth. The incident took place on the fifth day of the first Test when Marsh was originally given not out after he was struck low on the pads of a Kagiso Rabada delivery. However, the decision was over-turned when the ball-tracking technology showed it to be hitting more than 50 per cent of Marsh’s leg stump and he was sent back to the pavilion. FULL CRICKET SCORECARD: Australia vs South Africa, 1st Test at Perth

Following his dismissal, the DRS came under fire, with Johnson, former Australian skippers Michael Clarke and Mark Taylor all criticising the ball-tracking technology. Slamming the DRS, Clarke and Taylor both questioned the accuracy of the technology’s ball path, cricket.com.au reported. I was certain that was missing the stumps.When you look at that replay, I thought it was definitely swinging too far and missing the leg stump. He’ll be really disappointed with that. It has clipped his toe, then clipped his pad, and then got onto the bat, Clarke said while commentating on Channel 9.

Admitting that Marsh was `unlucky` to be given out, Clarke’s co-commentator Taylor said that the ball-tracking technology appeared to show the ball to be seaming back away from the Australian all-rounder, which he believes was enough to hit at least 50 per cent of the leg stump and overturn the on-field decision.

He was given not out so the technology has to prove that he was definitely out to overturn the decision.It almost looks like the ball seamed back a little bit and just done enough for 50 per cent to hit the outside of the stump, meaning the not out call was overturned, Taylor said. “I reckon the ball is going to flick the stumps at best. But to be overturned, Mitchell Marsh is very unlucky, he added.

Echoing similar views, Marsh’s batting partner Usman Khawaja had also questioned the on-field umpires. It was for the second time in the match that the DRS came under fire, following skipper Steve Smith’s dismissal on the Day two of the match. Smith was given LBW out by on-field umpire Aleem Dar after he was struck on the pads advancing down the pitch to debutant spinner Keshav Maharaj.

Immediately after Dar s decision, Smith signalled for a review and despite being several paces down the pitch, the tracking system showed the ball to be clipping leg stump, which was enough to send Smith on his way for a four-ball duck. 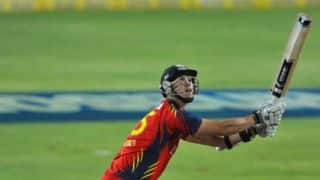