Beating Sri Lanka 2-0 is Australia's first Test series win in over a year.

Winning his first Test series as Australia captain has understandably left Tim Paine a relieved man, and one hopeful that beating Sri Lanka 2-0 at home will prove the springboard for sustained success.

Australia’s 366-run win over Sri Lanka in Canberra on Monday marked the first Test series win for Australia since they claimed the Ashes in December 2017. Since then, they lost in South Africa, to Pakistan in the UAE and to top-ranked India at home last month.

Paine, who took over as skipper in 2018 after the ball-tampering scandal in South Africa, had only once won a Test – in December when Australia beat India in Perth to level the series they would soon surrender at the MCG. Now, with Sri Lanka blanked by huge margins in successive games to push Australia up a spot to No 4 in the ICC Test rankings, Paine hoped the upwards movement continued. (READ MORE: Mitchell Starc’s ten bowls Australia to 2-0 win over Sri Lanka)

“It’s nice to get some reward. I’ve said all summer this group has been working really hard,” he said after the Canberra victory. “I think we’re starting to build towards something so it’s great to get some reward for the work we’ve been putting in.” (READ MORE: Paine s leadership this summer has been first class: Haddin)

Paine was especially pleased with his bowlers, who at Manuka Oval bowled Sri Lanka out for 215 and 149.

“The wicket didn’t offer a lot but they kept smacking away and bowled beautifully. For our group to get some belief out of this will be excellent moving forward,” said Paine.

Sri Lanka captain Dinesh Chandimal, who managed 24 runs in four innings, conceded that his depleted team was no match for Australia.

“We were outplayed as a team in all departments,” Chandimal said. “Credit goes to Australia. They have played some outstanding cricket throughout the series. “It was really tough. Especially in the last six months we couldn’t get the right combination to finalise our best XI.” 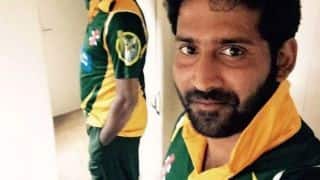